The battle of Vukovo Klanac was fought at the end of 1944 between the partisan and German armies in the area of today's border near Neum.

The battle for Vuk's Klanac was fought in the area from Metković and the river Neretva in the west of Pelješac with Ston in the south and exclusively Popovo polje in the north. The main part of the 369th Legionary Division "Vražja" - 369th and 370th Regiment, and the 9th Ustasha Brigade, artillery, tanks and other motorization that was being pulled out of Dubrovnik are taking part in this battle. Of the units of the 8th Corps, only the 1st and 11th Dalmatians and a group of island partisan detachments were involved in the battle. These units from Peljesac were aided by a British battery, and there were some Allied air strikes. 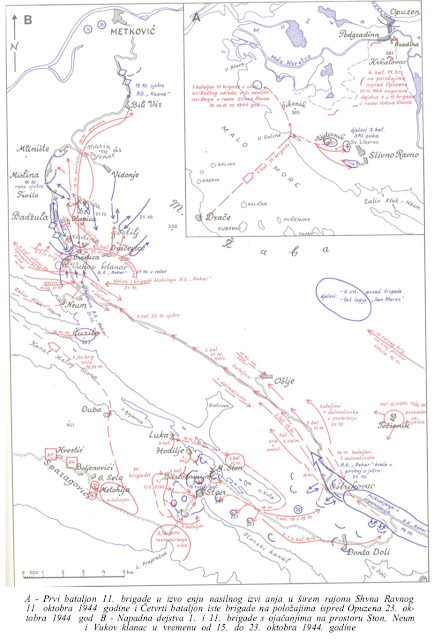 The Germans gradually engaged up to 8,000 soldiers, about 100 artillery pieces and 10-15 tanks in this battle. The partisan forces had a maximum of 3,000 fighters. The Germans were superior in manpower and combat technique. The battle for Vuk's Gorge began on October 15 and ended on October 23, 1944, lasting seven days, almost all in a very fierce, extremely decisive battle in which attacks and defenses alternated on both sides. Until in the end the quality and ability of the 1st and 11th Dalmatian Brigades, 26th Division prevailed, and the German 369th Division was defeated.

Ston was heavily fortified with a multitude of bunkers, minefields and wire fences. The introductory fights began on the night of 14/15. October in the form of a raid on German troops in front of Ston. On that day, the Allied air force repeatedly attacked the Germans in Ston, mostly rocketing German fortifications. A general attack began early in the morning. The attack was strong and gave initial results, but the opponent reacted with counterattacks. Then a company of Italian fascists from the "San Marco" legion arrived. From the line reached on October 17, the next day - October 18, the attack on Mali Ston and Ston began. Under pressure from the forces of the 11th Brigade, the Germans and Italian fascists retreated to Ston, because they lost Mali Ston. The fight in the city began. In particular, resistance was offered from the medieval fortress of Korona. During the day, all through fierce fighting, the 2nd and 5th Battalions of the 11th Brigade and the 1st Battalion of the South Dalmatian Island Detachment Group broke through the German defenses and entered Ston. In the afternoon of October 18, Ston is completely free. The remaining parts of the German army and Italian fascists retreated towards Rudine and Dol, and then to Oštrikovac. 250 German soldiers and 8 officers surrendered in Ston.

Capitulation of the Becker battle group

On the morning of October 19, a fierce battle began for Oštrikovac. At that time, by the order of the headquarters of the 369th Legionary Division, the Becker Combat Group was formed from all units on Oštrikovac, with a strength of about 4,000 soldiers. The group consisted of parts of the 369th and 370th Regiments, the 369th Artillery Regiment, 369th Legionary Division, parts of the 9th Ustasha Brigade and parts of the 49th Italian Legion "San Marco". The task of this fascist group was to open a passage from Oštrikovac, through Vuk's gorge and Metković and break the 1st and 11th brigades.

In the early morning of October 21, the German battle group "Becker" set out to break through the positions of the 1st Dalmatian. At the same time, the positions of the 4th Battalion, which was attached to the 1st Brigade, were attacked from the direction of Metković. Fierce battles developed in which the 4th Battalion successfully repulsed the enemy. The other battalions of the 1st Brigade pounded sideways on the German column, which was gradually moving, through the fighting, towards Vukov Gorge. At the end of the day, German forces from Oštrikovac joined forces with those from Metković. The fighting continued on October 22 because German motorization could not pass through Vuk's Gorge, where the road was destroyed.

During that time, the 1st Dalmatian was constantly attacking and narrowing the hoop around the German BG "Becker". At dawn on October 23, 1944, the German BG "Becker" was forced to capitulate. Barely a quarter of the German forces arrived in Metković from the entire column. All German machinery and equipment remained on the battlefield, partially destroyed or damaged.

During the fighting for Oštrikovac and up to Vuk's Gorge, the 13th Herzegovinian Brigade operated north of the Gabela-Dubrovnik railway, on the Hutovo-Hrasno stretch. She secured the flank of the 1st and 11th Brigades from the north, but did not take part in the battle for Vuk Gorge.

The total losses of the enemy in the area of Ston-Vuk's Gorge, according to the report of the headquarters of the 26th Division from November 17, 1944, was delivered to the headquarters of the 8th Corps, amounted to 2,000 killed and captured German soldiers and officers, 12 tanks, 2 blinds and 20 trucks were destroyed. 211 motor vehicles, one working tank, 60 various guns, 289 horses and another were seized. Units of the 1st and 11th Dalmatian Brigades had 56 dead and about 260 wounded.

The defeat of the 369th Legionary Division at Vuk's Gorge was also acknowledged by the highest German commanders. The commander of the German Army Group "F", Colonel-General Alexander Löhr, wrote that "north of Dubrovnik, the 369th Division suffered a significant defeat and lost almost all its artillery and heavy weapons ...". To justify the defeat of the 369th Division, the German historian F. Schraml writes: "..The German army at Vuk's Gorge was attacked by several partisan divisions, aided by English artillery with ships ..", which is not true. The victory won at Vuk's Gorge is the work of Dalmatian fighters!

For the history of the People's Liberation War and the 8th Corps of the Battle of Vuk Gorge, it speaks of the high quality of the 26th Division brigades. In the end, it can be stated that never in the NOR, neither before nor after Vuk's gorge, did it happen that two brigades of the NOVJ, in a direct collision and in an extremely difficult battle that lasted seven days, defeated a German division that she had behind her combat experience in the battles on the Neretva and Sutjeska.