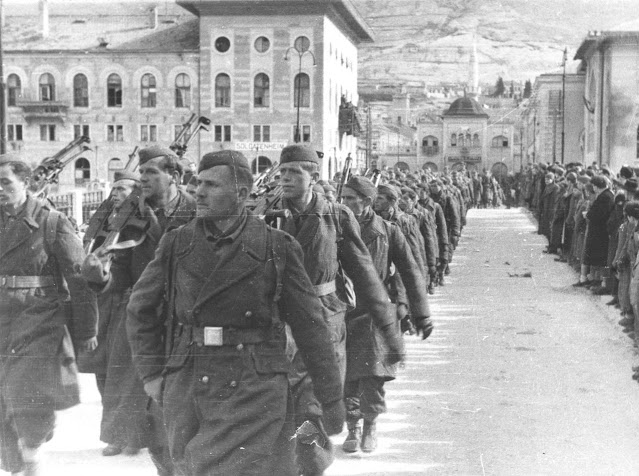 ·         Three-day battles began in which the reinforced Home Guard 1st Cavalry Regiment from Sokolac broke into the besieged Rogatica, but parts of the Romanija People's Liberation Partisan detachment and the battalion-Bajo Pivljanin-Durmitor NOP detachment inflicted losses of143 soldiers and officers.

·         In the village of Orahovac (in the Bay of Kotor), the Cucko-Čeklić battalion of the Lovćen People's Liberation Partisan detachment and parts of the Orjen partisan battalion attacked and, after a day of fierce fighting, disarmed the Italian crew. Enemy losses: 16 killed and wounded and 47 captured. The partisans, who had 3 dead and 6 wounded fighters, seized: 60 rifles, 5 p. machine guns, a larger amount of ammunition, 1 revolver, and other miscellaneous equipment and supplies.

·         After several unsuccessful attempts to penetrate from Danilovgrad to Nikšić and unblock the 207th Regiment of the Italian Division -Taro-, strong Italian forces (47th Reinforced Infantry Regiment of the -Alpi Graje- Division, 2nd and 4th Group of Alpinists -Vale- and two artillery divisions ), with the help of Chetnik units, undertook an attack in the main direction Danilovgrad-Nikšić. After five days of fighting, they overcame the defense (units of the NOP detachment -Bijeli Pavle- and parts of the Nikšić NOP detachment) and on February 19 penetrated Nikšić. The enemy had about 30 dead and a significant number of wounded, while the losses of partisan units were small.

·         From Prokuplje, the 14th Infantry Regiment of the Bulgarian 17th Division and from the village of Shiroki Njiva, a company of gendarmes and Chetniks of Kosta Pecanac undertook an attack on parts of the Toplica NOP detachment in Pasiača and Beli Kamen. In the battles near Pasjacki Vis, Bulgarian soldiers suffered losses of over 35 dead and wounded. The partisan units retreated towards the village of Statovac and avoided the blow of the superior enemy. In retaliation, Bulgarian units burned villages on Pasjaci Mountain, shot about 100 and interned more than 300 people.

·         Near the village of Bravnice, units of the 9th Krajina Strike Brigade of the 10th Strike Division of the NOVJ destroyed the Jajce - D. Vakuf railway and attacked a transport train. 10 home guards and 1 German soldier were captured, and the train was set on fire.

·         The Ustasha-Home Guard forces of over two battalions and a combined detachment of gendarmes and Volksdeutscher started a three-day concentric action of "cleaning" the premises of the village of Budjanovci - the village of Simanovci - the village of Ogar (in southern Srem). Under enemy fire, in difficult weather conditions, several thousand refugees (men, women and children), with part of the 4th Battalion of the 3rd People's Liberation Partisan Detachment of the 3rd Operational Zone of the NOV and PO of Croatia, withdrew to the marshy area of Bene (near the village of Ogara) and thus avoided complete encirclement and destruction. The enemy killed 8 and arrested 92 people.

·         In the village of Belegiš (near Stara Pazova), the Ustasha police brutally killed 21 people, and drove many people to Stara Pazova, then to Germany, to forced labor.

·         The President of the Refugee Government of the Kingdom of Yugoslavia, Božidar Purić, warned Ambassador Bogoljub Jevtić, in London: to ban Draža Mihailović's representative, Lazarević, from giving any statements, because they harm the Ravna Gora movement.

·         After 45 hours of uninterrupted march, the 1st Macedonian-Kosovo NOU Brigade arrived in the village of Bahovo (in Karadjoja, Greece). With that, she finished her February march, crossing 260 km. In that campaign, she fought for 14 days, continuously, against much superior enemy forces, breaking through the blizzard and high snow, at a very low temperature, without food, poorly dressed. Despite this, it managed not only to preserve its manpower but also, by tying strong Bulgarian forces to itself, to facilitate the movement of the Group of Partisan Battalions (-Stevan Naumov- and -Hristo Botev-), the Central Committee for Macedonia, through eastern Macedonia to the region Kumanova, For the courage and firmness shown, the brigade was praised by a written order from the General Staff of the People's Liberation Army for Macedonia.

·         Northeast of Celje, the 13th Slovenian Brigade - Mirko Bračič - of the 14th Division of the People's Liberation Army of Yugoslavia fought hard against German units that were advancing towards the village of Dramlje from the direction of Sveti Jurij. In the evening, across the road Slovenske Konjice - Vojnik, the division broke through to the section of the village Lindek - M. gora, where it was surrounded again.

·         In the area of the village of Dege (near Tropoja, in Albania), superior German units and ballists defeated the Malesijski People's Liberation Partisan Detachment (about 200 fighters). 18 German soldiers were killed and wounded. The detachment had 11 dead. Only about 80 fighters, mostly from the partisan battalion - Bajram Curi -, managed to retreat in an organized manner, in parts, towards Gjakova and Luma (in Albania). 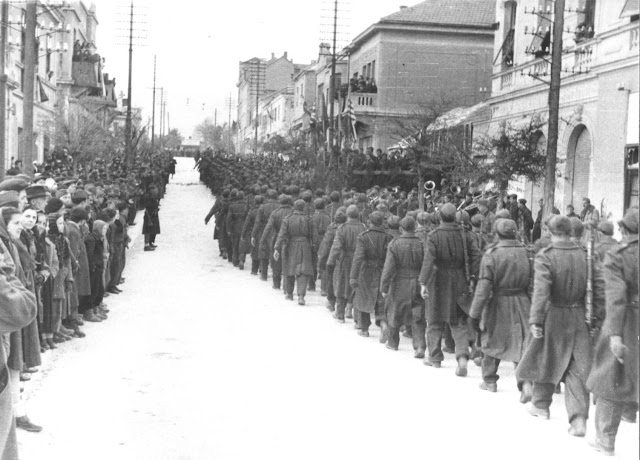