At dawn on June 10, 1943, the First Proletarian Shock brigade under the command of Koce Popovic and his deputy Danilo Lekic broke through the German encirclement at Balinovac, marking the beginning of the end of the largest and most difficult Partisan battle in the Second World War - Battle of Sutjeska. One of the participants of this battle, Antonio Isakovic, thus described the morning in which the First proletarian started the onslaught; onslaught on which depended on the lives of besieged partisan fighters led by Supreme Commander Tito:

"There is a young forest, a meadow in front of us. But the low, thick fog, like milk thick fog, almost nothing is seen ...Out of this forest, I see, partisans go out. First Proletarian Brigade is coming out. Suddenly, the fog is stopped, the fog suddenly lifted, meadows remained clean. And on the opposite side of the meadow, somewhere around eighty to one hundred meters away from us, the German trench. That's Balinovac. There are the Germans. Entrenched.

„I remember well. DaniloLekić commanded: 'The 1st proletarian – onslaught!!’ And, probably, I believe that was the only time when the entire 1st Proletarian stormed. Across that clearing. We were all in the same firing line. For the first time, all of us... All troop commands, all battalion staffs and the brigade staff, and the Spaniard (DaniloLekić), and the Blue were storming, and all the couriers, all chefs, all paramedics... Everyone came out, all of us who were there. We headed off. And we all knew: there is no going back. We must break through...“

Seventy-five percent of the First proletarians soldiers were younger than twenty-five. Among them were two hundred students, eight cadets, six gendarmes, five priests, ten housewives and one writer and musician. 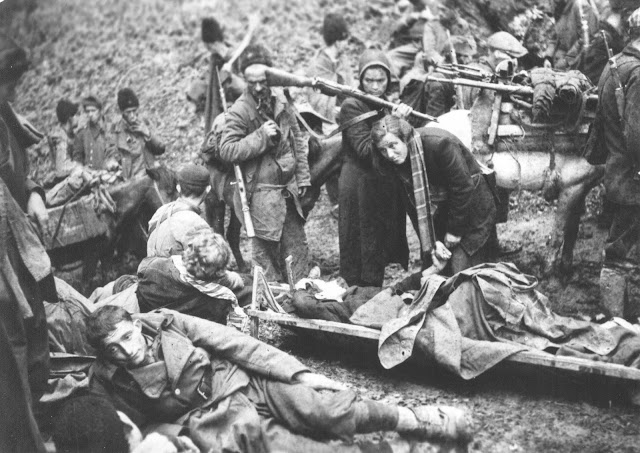 Antony Isakovic onslaught of brigade described like this: "You're just going ahead... Astoundingly forward. In the mist, I saw a wounded comrade who he shoot himself. He does not want to remain as a wounded man. We drove out of that forest and just ran, ran unsustainable ... And our constant battle cry, more battle cry, to all of us: Onslaught proletarians! onslaught! ... 'Just onslaught ... ... We know that we do not have anywhere else except - forward. Just run and the better you see the yellow trench; The Germans lying there, their MG's ready to shoot ... Germans are firing, but we attack; a German, I see, is raised to escape.I remember those images: the German officer from the gun shoots at him, he shoots at his soldiers. He does not let them run away. In vain, We smashed the Germans, I do not know how. It seemed that we would slaughter them with our own teeth. "

to be continued
battle