The 369th Infantry Regiment (also known as the Croatian Legion) or the 369th Legionna Regiment was a unit of the NDH Army. From the foundation in the summer of 1941 to the surrender to the Russians, in the beginning of February 1943, operated as part of the Wehrmacht (army of the Third Reich) on the Eastern Front.

On 2 July 1941, in the NDH, General Ante Pavelic issued a call for volunteers to fight Bolshevism. Between 3 and 7 July 1941, there were over 5,000 volunteers at the surprise of the Ustasha authorities. It is important to note that NDH never declared war on the Soviet Union as it was declared to America, so the legionaries there was part of the German military machine as foreign volunteers in the Wehrmacht army.

Of the 3,865 people selected, the "369th Infantry Regiment" (or 369th Verstärktes Infanterie-Regiment (Croat.)) Was made on July 16, 1941, consisting of three battalions. The first was formed in Sarajevo, the second and third in Varaždin and Zagreb. Colonel Ivan Markulj has been set up for the commander, and after a lack of training in Dollersheim and Stocker, departs by train to Dangeni in Bessarabia, where it gathered on August 23, 1941.

After exhausting all-day marching on mud roads of 755 kilometers and 35 days of walking, the regiment took place on October 1, 1941, in the village of Budinskaja. In this village comes in the first contact with the enemy. On October 9, 1941, regiment entered the village of Nadeždovka in the composition of the 100th Jager Division, the 17th German Army, the Armory Group South.

The regiment entered into battle without much of the prescribed and planned training and equipment, so until mid-1942 it was assigned to various German units by battles and groups depending on the Blitzkrieg needs. By some sources, the legionnaires seemed so neglected that German officers once thought that they were Russian prisoners.

In the beginning of 1941 and later up to the Battle of Kharkov 369th Regiment had big problems with morale and discipline legionnaires. More than a hundred legionnaires fled, and some were shot by a 100th division court martial. According to Colonel Ivan Markulja's report of September 13, 1941, there was a disorder in the Legion and undisciplined. John Markulj reports to Zagreb to legionnaires steal, rob, rob, shoot at night, leave the unit and transported by private car more than 100 kilometers, throwing weapons ..... rape. Later in the winter, legionnaires wear uniforms of captured Russian soldiers, winter caps, and shawls instead of Croatian caps. September 30, 1941, from the village of Novi Senečani commander Ivan Markulj, returns 43 officers and NCOs and as many as 144 legionnaires in their homeland for illness or misconduct. In April 1942, four legionnaires were sentenced to death and shot, and some were sentenced to prison of 2 to 10 years.

Dystheria and jaundice caused by the unhygienic have decimated the combat condition and legionaries call them "Russian Disease". Lieutenants Tomljenovic, Tomislav Anić, and Ivan Malički died in that period.

Poor images of undisciplined, mischievous behavior, non-educated, poorly equipped, and disparate legionaries soon change it in the first serious contact with the enemy. The German command with admiration on many occasions written praises and distinguished legionaries for their exceptional courage and military posturing in the extremely difficult and perilous battles. In October 1941, the first legionnaire was awarded the German Iron Cross for Courage at Kharkiv. was Lieutenant Eduard Bakarec. Later, a highly-decorated and wounded in the fall of 1942 at Stalingrad (Bakarec evacuated from Stalingrad and was killed in Croatia on 5 July 1944.).

There have been more successful operations in difficult conditions both in the attack and defense during the desperate Russian counterattack, especially during the toughest fighting around Poltava, the Samara River, Kharkov, Kalača, and at the crossroads of Dona and the colony "Proljet Kultura" and at the end of the battle for Stalingrad.

After heavy fighting and high casualties in the Kharkiv battle, in May 1942. The German command awarded Colonel Ivana Markulj, Eduardo Bakarac and six other officers of the regiment the German Iron Cross of the first order. In Stalingrad in the fall of 1942, General Sanne and other German high commanders praised the 369th regiment as extremely brave and successful in attacking and defending during the difficult battles in the spring of 1942.

At the end of September 1942, the 369th Regiment was visited by the head of NDH Ante Pavelic and rewards a greater number of legionnaires. Pavelic on the Eastern Front visiting and rewards  Croatian fighter pilots and bomber crew as part of the Luftwaffe. The artillery support of the Croatian legion under the command of Lieutenant Colonel NDH Marka Mesic according to by German and Croatian reports and numerous medals was very effective. In many difficult battles in 1942, Mesic's soldiers, in written praise and testimony of the Germans and Croatian legionnaires, saved some battalions from total destruction and heavy losses. 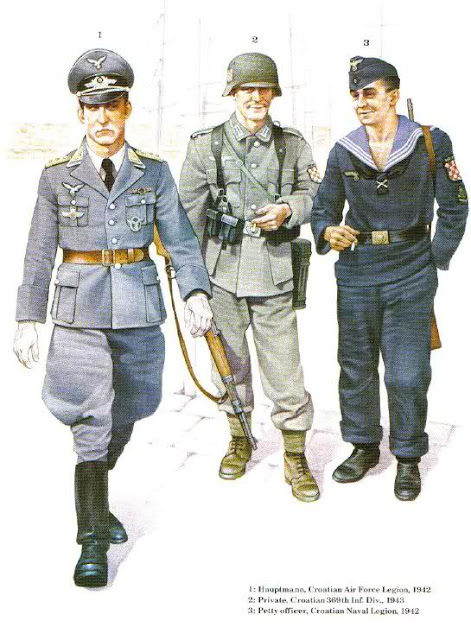 Two days later the 100th Light Infantry Division was committed to the Battle of Stalingrad.

New fresh forces from Croatia were not added except for returns of sick and wounded and a few officers and staff. A total of 22 (15%) officers were killed, 38 (26%) wounded and 66 (45%) returned to Croatia from the original 147 Legion officers in total before fall. Only 20 officers, including Mesic, remained in Stalingrad.
369 battle