Pohorje Battalion (officially 1st Battalion of the Pohorje detachment) was a partisan unit, which was established on 11 September 1942 in Dobrovlje on Pohorje, Slovenia.

At the beginning of the unit was considered of 90 fighters that arrived from the Pohorje Dolenjska, Šaleška, and Savinja Valley. It was composed of soldiers of the 1st Battalion of Savinjski Detachment II. groups of detachments (Kranjčev battalion), who came in summer 1942 on Styria from Dolenjska and renamed the 1st Battalion of the Pohorje detachment, and fighters Šaleška and Savinje troops first Styrian battalion. Battalion commander was Rudolf Mede, the political commissar Jože Monk.

For four months, the unit of the Pohorje Battalion carried out on around 120 actions, including the most important:
on 8 October burning of eight mountain house, that the Germans were used as strongholds;
on 23 October attack on OPLOTNICA;
on 4 November burning cardboard factory in Mislinja;
on 7 November fight with the Germans at the Tri kralja;
on 28 November fighting on the Crni vrh, and the Pungrat, on 7 December 1942.

On 6 January 1943 Commander of the Security Police (Befehlshaber der Ordnungspolizei) in Maribor Major General Otto Lurker issued command No.106 for an attack against the Pohorje battalion. 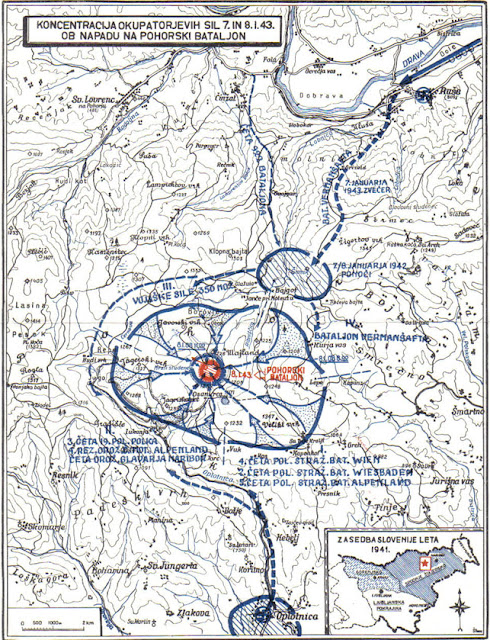 The Germans managed, through intelligence channels of the Gestapo, to obtain information about the Pohorje battalion and his camp, and on 7 January 1943 were transferred from Maribor seven police company and a battalion - {} Wehrmannschafta - in Ruse, Oplotnica and Slovenj Gradec.

On 8 January 1943, about 2,000 men surrounded the battalion camp in Osankarica. Until the first serious confrontation occurred around quarter to twelve in the morning. The Germans immediately had 4 dead and 5 wounded. Partisans fought two and a half hours until they were all killed. Only the wounded partisan Franc Kunaver - Sulca Germans captured alive. In July 1943, the hostage shot in Ljubno in the Savinja Valley. In their last fight, it fell 69 fighters Pohorje battalion. All fighters, the Germans drove the Austrian city of Graz and was buried in the local cemetery.

A magnificent ultimate struggle was a big moral boost in the subsequent battles with the enemy. Seven members of the Pohorje Battalion were declared national heroes.

For their struggle during the National Liberation Struggle and the heroic death of his fighters Pohorski partisan battalion in 1951 awarded the Medal of  Merit for the People.
battle