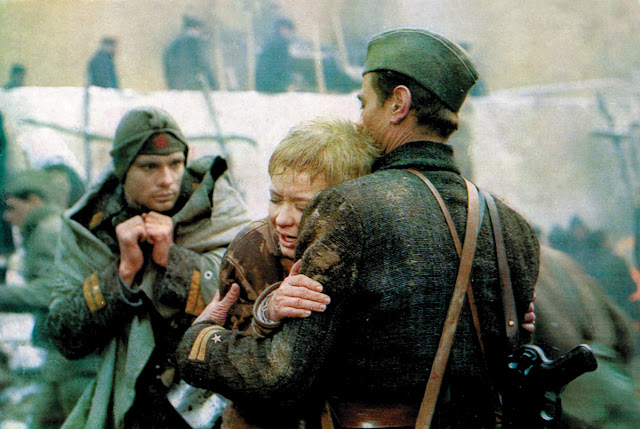 Yugoslav war film made in 1962, directed by Veljko Bulajic. The movie was known as the first partisan epic in the history of Yugoslav cinematography. It was made to mark the 20th anniversary of the battle on Kozara Mountain. This film won golden medals at the festivals in Moscow and New Delhi. In this movie, Branko Lustig played the role of a German soldier who got blind during the battle. Lustig later became a successful Holywood producer.

This movie was filmed in 1963, directed by Fadil Hadzic. It is based on true events regarding the German attempt to liquidate Tito and the Partisans' Supreme Headquarters with unexpected airborne assault on the city of Drvar in 1944.

War story directed by Hajrudin Siba Krvavac, which tells a story of a group of Partisans who have an important task - a destruction of an important enemy strategic point, the bridge, and stop the withdrawal of the German troops from Greece towards the west.

The movie made in international co-production with Italy and West Germany, directed by Veljko Bulajic. It is considered the best and the most expensive Yugoslav war movie. Assessment of the budget of the film ranges from 4.5 to 12 million dollars. The movie tells a true story of the withdrawal of Partisans and the wounded during the Fourth enemy offensive in 1943. The movie was nominated for an Oscar. Poster for the English version of the movie was made by Pablo Picasso.
Main roles: Sergej Bodnarchuk, Yul Brynner, Anthony Dawson, Milena Dravic, Boris Dvornik, Velimir Bata Zivojinovic, Orson Walles.

A movie directed by Hajrudin Siba Krvavac, filmed in 1972. The movie is a free interpretation of the biography of a real anti-fascist fighter - Vladimir Peric Valter. Thanks to the spectacular action scenes and a lot of humor, the film gained extreme popularity and is classified among one of the most successful Partisan movies.

The Battle of Sutjeska is a Partisan war movie directed by Stipe Delic. It was made in 1973 in the SFR Yugoslavia.  It tells the story of the famous Battle of Sutjeska, the greatest engagement of the Yugoslav Partisan War. This movie was made for the 30th anniversary of the battle. It was filmed at the authentic site where the battle took place in 1943, in the National Park Sutjeska, also known as the Valley of Heroes.  It is one of the most expensive movies in the history of Yugoslav cinema. Tito has personally participated in the making of this movie. He insisted that his character was played by the famous British actor Richard Burton.

Serbian movie filmed in 1974. It tells the story of the rise and fall of the Uzicka Republic (the Partisan-free territory in WWII in Serbia) and a love story between Boro, a former fighter in the Spanish war, and teacher Neda, who joined the Partisans together.

Yugoslav war movie and TV series made in the production of TV Belgrade. This is a story about a group of illegal fighters in the occupied Belgrade. Due to great popularity, a sequel to the TV series called "Povratak otpisanih" was made two years later.

Movie filmed in 1983. The film is about the breakthrough of the German encirclement by the 1st Proletarian Brigade.

Partisan's Escadrille is a Yugoslav movie from 1979 directed by Hajrudin Krvavac. Leading actors are Bekim Fehmi, Velimir Bata Zivojinovic, and Ljubisa Samardzic. This is a movie about the creation of partisan aviation and its early struggles.

My name is Edin Hardauš. I was born in Bosnia and Herzegovina, and I live in a small town Kakanj, near Sarajevo. I am a professor of history. I am most interested in war history, military strategy, military weapons and vehicles, and of course the study of historical battles ( reading books and watching documentaries on this subject).