Exactly 35 years after the May Day parade in 1950, proudly presented the first domestic Yugoslav tank Type-A, or a copy of the Russian T-34, on May 9, 1985, a Victory parade was held in Belgrade, featuring a new domestic tank M-84.

Everything started much earlier, even in the mid-seventies when the military leadership of the JNA became aware that the issue of the purchase of a new tank cannot be postponed indefinitely. The military leadership of the JNA decided to purchase new tanks cannot hold off. Given that 35 percent of the tank fleet accounted for the old T-34 models. The only newer models were T-55 tanks that were already about 20 years old. The tanks model, which was interested in military experts of the JNA, was the T-72 produced by the Soviet Union (USSR). But Moscow has explicitly announced that negotiations for the sale of licenses for the production of this model do not come into consideration.

Only after intervention at the highest level, the Soviet Union received a group of experts from Yugoslavia which was screened T-72. The Tank demonstration was conducted at the military academy Vistrel, 30 kilometers from Moscow. After the demonstration, the experts' impressions were uneven, but the final conclusion was that this is the best tank and that it can be produced in Yugoslavia based on the license. Based on reports from the expert group and the opinion of the Military Council and the Military Military Technical Council, a decision was made to purchase a tank T-72 license. Finally, the license was sold for $ 39 million, with a duration of 10 years or 1,000 produced tanks.

The next step was the agreement on which plants will produce a tank. Each Yugoslav republic wanting to acquire as much percentage as possible in the production process. It was uncertain and who will be the finalist for production, and in the competition were the factory Đura Đaković from Slavonski Brod, Goša from Smederevska Palanka and Mechanical Institute in Nis. - Let's be what the experts say. As far as the finisher of the production of the tank is concerned, as experts claim that all three companies have approximately the same production conditions, and as Croatia has the lowest percentage of engagement in military programs, let the finalist of the tank be in Croatia, and to finish it. - Tito decided

Prior to the start of production was to get many machines and equipment. For the technological process should be available press force pushing 30,000 tons, with additional presses of 5,000 and 10,000 tons. In the competition of several companies, this technology was given to the Aluminum Combine from Podgorica.

In the middle of 1979, she began to get the license documentation, which was soon found not to be complete. All received documentation had to be arranged, translated and assigned to the foreseen companies, which was a huge job. Because only construction documentation for the trial series consisted of approximately 120,000 pages of A4 format, and 200,000 pages were delivered to the engaging companies. Arrived license document are together weighed about 20.000kg.

Processing and translation of the license documentation cost $ 7 million, the creation of special tools $ 121 million, and the total investment in the economy cost about $ 2.9 billion. Ultimately, the cost of training to start production of tanks cost $ 3,08 billion, and the production process was attended by 240 factories, and indirectly another 1,000 work organizations.

In the production of tank M-84, the economy from the entire former SFRY took part, 240 work organizations directly and around 1000 indirectly. Some of these factories were:

The production of the test model was finally started and the first prototype called the M-84 was completed in April 1983. In the coming years, Tank improved, and the public was acquainted with the existence of this tank on May 9 at a military parade in Belgrade, when the ceremonial echelon of M-84 tanks passed through the streets. Production of a tank has cost 700,000 US dollars, and after the parade in 1985 and began mass production.

In the next three years, 370 M-84 tanks were produced in four series. During this period, 150 M-84AB samples were made for Kuwaiti armed forces. In the Yugoslav factory, a total of about 650 pieces were produced in all versions. 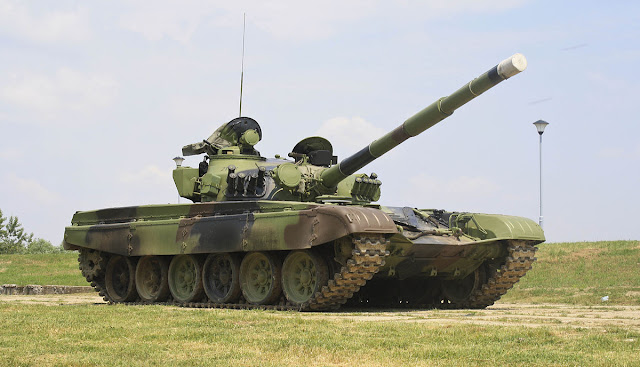 The Yugoslav model of the tank differed in terms of the Soviet T-72 in an improved engine version, a new fire extinguishing system, greater firepower, more precise firing in the distance moved, and a number of other improvements.