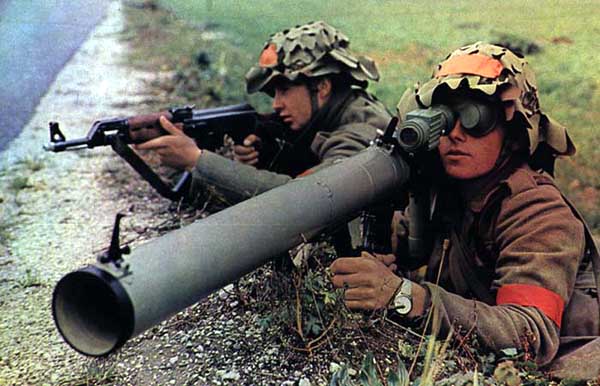 M79 Osa is a portable anti-tank rocket launcher 90 mm, developed in Yugoslavia for the needs of the JNA. It resembles the French portable anti-tank launcher 89mm LRAC F1.  The M79 Axis system includes a launcher, a missile, a CN-6 targeting system, and a container for carrying missiles. The M79 is effective in fighting armored combat vehicles and fortifications.

The launcher itself is made of fiberglass with armrest, shoulder arm, and grip, which served as an indicator of the ignition of the rocket. The rocket consisted of an explosive charging head, a rocket-propelling body and missile stabilization wings that were located on the tail of the body of the rocket. On impact, a piezoelectric impact fuse in the rocket triggers the shaped charge warhead, which can penetrate up to 400 millimeters of armor. The fuse is sensitive enough to trigger the warhead at impact angles up to 70 degrees from the vertical. After firing, the spent rocket container is removed from the launcher, and a fresh tube is attached.

To use the M79 is required two-person team: operator and assistant. The loader inserts the rocket container through the rear of the launcher. The operator then takes aim at the target through the CN-6 sight. The CN-6 sight has 3.5x magnification and a 10-degree field of view. It also features anti-laser filters to protect the operator from blinding battlefield lasers. When the trigger is pressed, the rocket motor is filed electronically. The rocket leaves the launcher at a speed of approximately 250 meters per second. It is accurate enough to be used against armored vehicles at a range of 350 meters and can engage larger stationary targets up to 600 meters away.

Osa was used in all the wars that have emerged after the breakup of Yugoslavia. It was also used by the OVK (Kosovo Liberation Army) during the war in Kosovo. Since the weapons were exported to Iraq, it was also used in the first and second Gulf War. 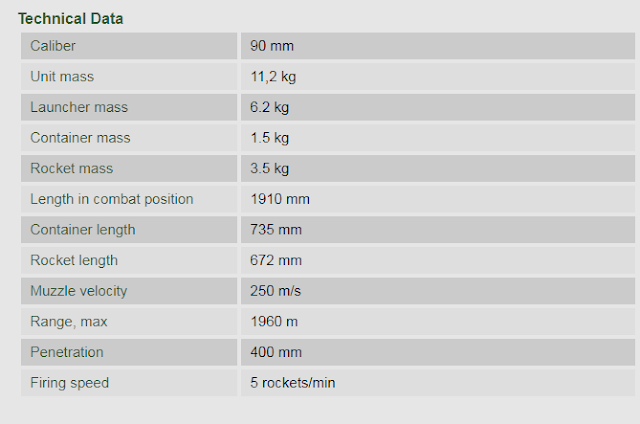 A large number of M79 OSA rocket launchers have been supplied to "rebels" in Syria which have been proven effective in deterring the Syrian Army's armor. Many have mistaken the M79 supplied to the rebels in Syria for the Russian RPG-29 rocket launcher, which is also seeing use. M79 Osa's are also used in Iraq by Islamic State against Iraqi army and JANES is reportedly used against US-made M1A1 Abrams tanks. 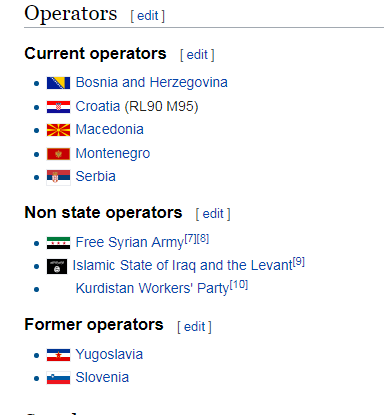