The M-3 Tank Series (The British service name "Stuart" came from the American Civil War Confederate General J.E.B Stuart and was used for both the M3 and the M5 Light Tank derivative.) Is probably the best light tank in World War II (produced over 20,000 copies). This tank model was built on the basis of the previous model M-2. Serial production started in mid-1941, under the designation M-3. After 5,810 copies produced and based on war experiences, in June 1942, the production of the new version of M-3A1 began.

American Car and Foundry have produced around 4,600 M3A1. In some instances, embodied both diesel engines, due to shortages of the basic Continental engine. In December 1942, the production of the new version began - M3A3. This version had a different armored body (similar to the version M-5, which had a different drive and transmission).

The British Army was the first to use the Light Tank M3 as the "General Stuart" in combat. From mid-November 1941 to the end of the year, about 170 Stuarts (in a total force of over 700 tanks) took part in Operation Crusader during the North Africa Campaign, with poor results. However represented a serious threat to the then models of German tanks PzKpfw III and IV, primarily due to greater mobility and stabilized cannon.

During 1944, versions A1 and A3 were delivered to Yugoslavia. The difference between these two versions is a different turret and an armored body, new periscopes for the driver and commanders, a different position of the driver hatch and a different shape of the front armored body. Tanks M3 (A1 and A3), although already outdated, proved well in the battles that were led by the First Tank Brigade, especially in the liberation operations of Mostar, Knin, and Trieste. 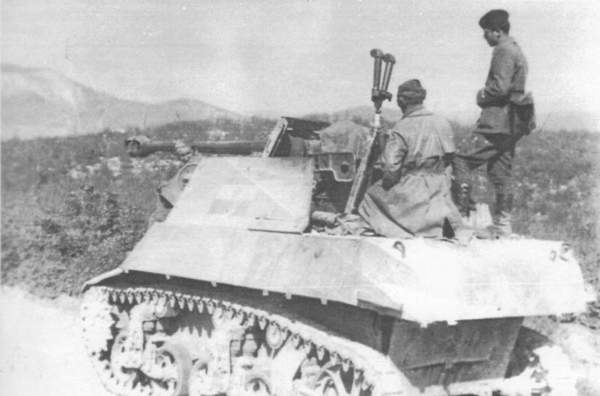 Some of the damaged tanks, which could not be repaired, were equipped with other weapons, so unique vehicles were obtained. A German anti-tank gun (PAK 40 75mm) and an anti-aircraft gun (FLAC M38 20mm, 82mm mortar) were mounted. It is possible that a lightweight German howitzer SiG 33 was mounted on one vehicle, but this vehicle was destroyed in the first fight. In total, 7 vehicles were modified, which served until the end of the war.

Director of the technical workshop of the 1st Tank Brigade, Anton Kurt, recalls...

"The workshop was moved to Sibenik at the electrode factory. Excellent halls. electric cranes, a large machine park. More than good working conditions. Excellent accommodation of the people. In the last battles, we've had a lot of tanks damaged, burnt. We start to resolve a big problem on the tank '' Stuart '' (whom we called '' Flying Frajla ''). the hatch driver was blocked as soon as the turret was out of the center, and this was the reason why the driver and assistant could not get out of the damaged tank. The English officer took a sketch of our revamped doors and sent it to England. We saw, when we came back to Italy again, that they repaired the doors on their tanks in the same way ... "
After the war, these tanks remained in the armies of the Yugoslav Army for a long time. In 1960, 32 Stewart tanks were still in service.