2. 6. - started Ustasha slaughters around Ljubinje and in the village Drežanj near Nevesinje, where on June 3, comes to armed resistance.

4. 6. - The agreement between Germany and the Independent State of Croatia in Zagreb about the deportation around 200,000 Serbs in Serbia, and the same number of Slovenians in Croatia.

5. 6. - The uprising in NDH 1941 .: around Gacko in Herzegovina began a spontaneous uprising provoked by the Ustasha violence.

5. 6. - A large explosion of stored of ammunition in the Smederevo fortress - almost all the houses in Smederevo damaged, about 5,000 victims.

5. 6. - The meeting of Ante Pavelic and Hitler at Berchtesgaden. 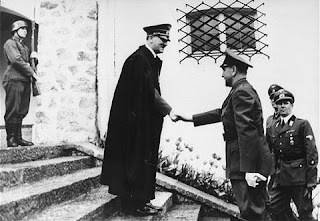 6. 6. - Appeal of King Peter II Pope Pius XII and President Roosevelt to save the Serbian people from extinction.

9. 6. -
Field Marshal Wilhelm List appointed the commander of the armed forces for Southeast, based in Thessaloniki.

21. 6. - King Peter II and most of the government arrived in London from Jerusalem.

22. 6. - Founded Sisak national liberation partisan unit (which is now considered the beginning of the uprising in Croatia).

22. 6. - Proclamation of the Central Committee of Communist Party of Yugoslavia calls for the uprising.

24. 6. - The attack on a gendarmerie station Lukavac near Nevesinje began an uprising in the upper Herzegovina.

24. 6. - The Conference of Catholic Bishops in Zagreb confirms loyalty to NDH.

26. 6. - Pavelic extraordinary provision and command - Jews in "camps under the open sky," people who have "sinned against Croatian national interests" that within eight days to leave the state and other agencies.