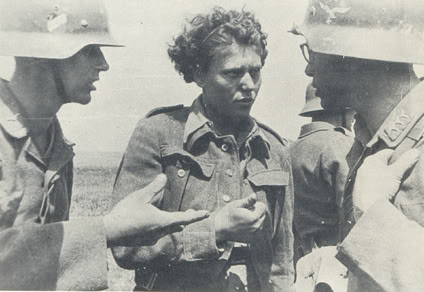 Partisan Gospe Talić, captured by the Germans in Drvar landings, May 1944

G.Talić refused to say where Tito was hiding.

The heroine of World War II the age of 17 entered in the Partisan ranks and became the first fighter Bihac youth  Company. On this day he or she reaches 66 years of the failed German parachute assault on Drvar and attempts to capture Josip Broz Tito, 25 May 1944. The war experience has multiple connections to Bihac, because of a large number of Biscan, participants officer school, he gave a great contribution to breaking the assault, a young 19-year-partisan biscanka Lady Talić medical student, of course, was captured. 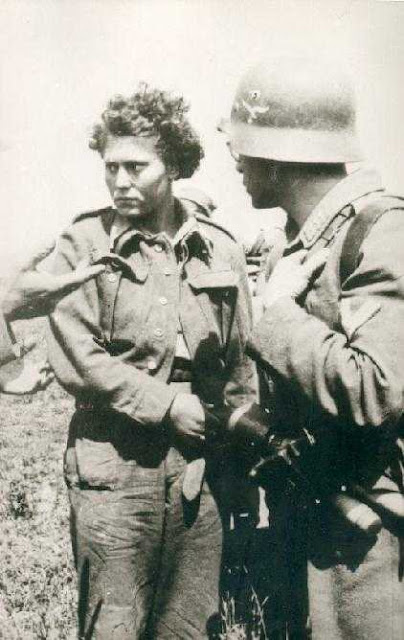 Her photos were shot by German parachutes during the capture, then circled the entire free world. This photograph was published and illustrated American magazine "Life" and seeing the defiant figure of Our Lady Talic, U.S. President Roosevelt said: "Tito's decision to fight against fascism is a true turning point of World War II.."

BIHAĆ, 25 May (AP) - On the occasion of 66th anniversary of the Allied raid on Drvar, a member of the Women's Forum SDP Bihac visited the tomb of Lady Talic, the heroine of World War II, the slopes of the local community Debeljača Lake - Privilica and laid flowers.
Her pictures captured after the Šobić cemetery in Drvar in the German operation "Rösselsprung", which aimed to capture Josip Broz Tito and the members of the Supreme Headquarters of NOV and POJ, toured the world.

This photo also published the American illustrated magazine "Life". According to folklore, this is a partisan risked his own life is taken off a partisan battle tank military blanket, which allows the driver to see where it goes, a pointer to shoot German paratroopers.

Lady Talic has survived invasion and died in 1977. in her native Bihac. She lived 52 years. She was buried in the family cemetery on the slopes Debeljača Talic, above the streets of Mehmed Fazlic.
Other