Miroslav Ferić, the war pilot of Polish 303 fighting squadrons Royal Air Force, has not been forgotten in Poland and his picture was featured on the aircraft MiG-29 Polish air force.

Ferić was born in Travnik in Bosnia and Herzegovina, his father was Croatian (who died during World War I), and his mother was Polish. In 1919 his family moved to Poland. He graduated in 1938 from a cadet flying school in Dęblin as a fighter pilot and served with fighter escadre No. 111 with a rank of podporucznik pilot (2nd Lt. pilot). 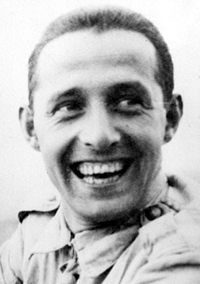 During the Invasion of Poland in 1939, he served with Escadra No. 111, assigned to the Pursuit Brigade (Brygada Poscigowa) and defending the Warsaw area. On 3 April his PZL P.11c fighter was damaged in combat but he successfully bailed out. During the campaign, he shot down a Hs 126 on 8 September as a 'shared' victory (other sources also credit him with a Bf 110 shared with others, but this victory was not officially credited).

When World War II began Miroslav with his colleagues moved to France and then to Britain, where together with fellow pilots from 303rd hunting squadron which according to historians was very important, according to some, a vital role in the defense of the United Kingdom.

The squadron consisted of Polish pilots called the "Kosciuszko" by the name of the Polish MILITARY Engineer and military leaders. The squadron was one of 16 Squadron of the Royal Air Force. At the beginning, Squadron was not well equipped, neither with a good effect.  When they get better equipment for only six weeks managed to break the 126 Nazi fighters.

After an operational break the squadron was back in combat in January 1941, flying Supermarine Spitfires on missions over France. On 22 June during a bomber escort he shot down a Bf 109, and on 27 June damaged another. In October he was sent to a six-month rest tour to an Operational Training Unit as an instructor, but after three months he volunteered to return to a combat posting.

Ferić returned to No. 303 Squadron in January 1942. On 14 February, he was killed at RAF Northolt after his Spitfire (BL432) broke up at 3,000 feet (910 m) and the resulting G-forces as the aircraft corkscrewed held him inside and prevented him bailing out.

Mirosław Ferić was the 11th ranked Polish fighter ace with 8 and 2/3 confirmed kills and 1 probable kill. From September 1939 he had kept a personal diary, which became No.303 Squadron's unit history.
The Polish Air Force preserves the memory of its war veterans and as you can see in the picture this Polish MiG-29 is adorned with pictures Bosnian Croat Miroslav Ferica.