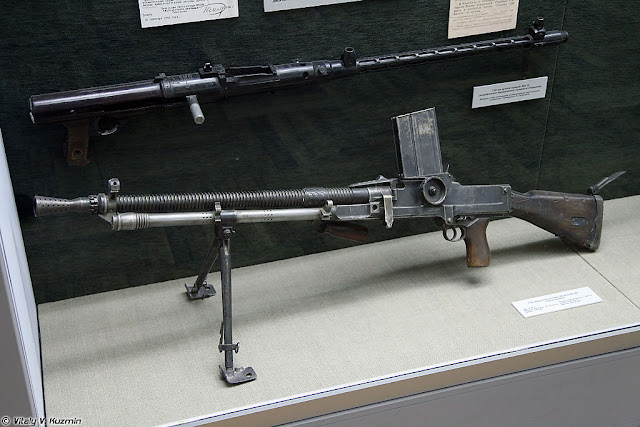 ZB vz.26 was a  Czechoslovakian machine gun, which was designed by Vaclav Holek for the company Eskoslovenská Zbrojovka Brno.

In mid-1921 the military of the young Czechoslovakian state embarked on a quest for a light machine gun of their own. Early trials included foreign designs such as Berthier, M1918 Browning automatic rifle, darn machine gun, machine gun Hotchkiss M1914 machine gun, machine gun Madsen, St. Étienne Mle 1907, and several domestic designs. Of these, the most important were the Praha II, a lightweight, belt-fed weapon built at Ceska Zbrojovka (CZ) Praha (Czech Arms factory in Prague). Development of the ZB-26 began in 1923 after the Czechoslovak Brno arms factory was built. Since CZ-Prague was a relatively small factory with limited industrial capabilities, it was decided to transfer the production of the new automatic weapon to the more advanced Zbrojovka Brno,

The ZB-26 saw service with the Czechoslovak infantry, as well as being the primary or secondary armament on many later Škoda armored vehicles. It is believed that the ZB factory turned more than 120,000 ZB-26 guns between 1926 and 1939 in a variety of calibers (the most popular being its original 7.92 × 57mm Mauser). It was exported to twenty-four European, South American and Asian countries, both in its original form and in the slightly improved ZB-30 version. Large batches of ZB light machine guns went to Bolivia, Bulgaria, China, Romania, Turkey, and Yugoslavia. Exports continued up until 1939 when Nazi Germany under Adolf Hitler took over Czechoslovakia.

The Wehrmacht soon adopted the ZB-26 after the occupation of Czechoslovakia, renaming it the MG 26 (t); it was used in the same role as the MG 34 and a light machine gun. Many more countries imported or produced the design under license, including China, Serbia, and Lithuania. Chinese Nationalist forces used the ZB-26 chambered for the 8 × 57mm Mauser round in their struggle with Communist Chinese and later the Imperial Japanese forces.

During the Korean War, Chinese Communist forces employed the ZB-26 against UN forces, and PVA ZB gunners developed a well-deserved reputation for long-range marksmanship. During the First Indochina War with French and later South Vietnamese forces, the ZB-26 was found in the hands of both the North Vietnamese Army and the Viet Minh guerrillas.
military_vehicle_and_weapons