M-70 AB is the most widely used assault rifle, also one of the last Zastava rifles manufactured in Yugoslavia. It is derived from the Soviet Kalashnikov AK-47. Today there are many copies. One of the most famous is Serbian, because of improvements that have been incorporated into it. Produced in Kragujevac, as a variant of known rifle Kalashnikov AK-47. It is known as the "The gypsy". Uses ammunition 7,62x39 mm.

The M70s also have a grenade-launching sight and gas cut-off on the gas block and are capable of launching rifle grenades. To launch them a 22 mm diameter grenade launching adapter is screwed on in place of the slant brake or another muzzle device.

The best results are achieved when targeting of live force. Individual fire on the ground precision is up to 400 m, and 500 m in the air. The short bursts precision it is up to 300 m, a burst of about 200 m. Combat rate of fire is 120 rounds per minute. Mode of fire can be burst and individually.
Combat kit is 150 the bullets. On the rifle can be placed rifle grenade attachment, to fire all types of rifle grenades, and can be set adapter pitcher grenades, so they can fire.

Its advantage over the original AK-47 is that it is conducted according to strict of tolerance deviations of clearances. The service life of a rifle is 10 000 the bullets. It should be noted that the Crvena Zastava allow the licensed production of M70 in Iraq called Tabuk. The only difference Tabuk and Zastava M70 is that Tabuk has a hard chrome tube and M70 does. 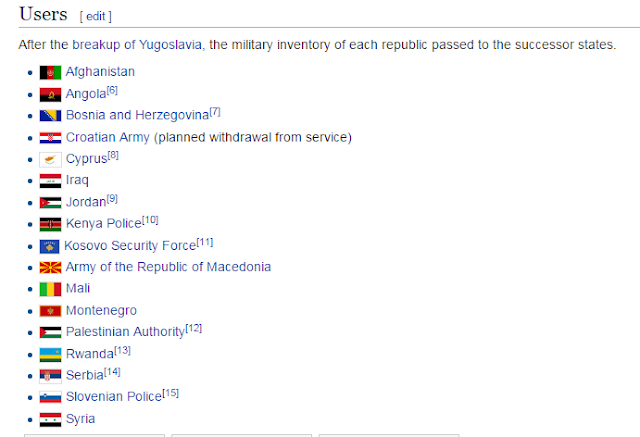