AK-100 is a Soviet automatic naval gun caliber 100 mm is designed to engage targets at sea, on land, and in the air, including low-flying missile. It was developed in the 1970's as a more capable alternative to the 76mm AK-726 twin gun mount. Production has switched to the more capable A-190 naval gun turret. The A-190 is a further development of the AK-100 with a higher rate of fire.
The Russian fleet has 58 of these weapons, mounted on 33 ships - class Admiral Goršakov (ex Baku), Admiral Ushakov (ex-Kirov), Udaloj, Rjezivij.

The AK-100 is a single barrel gun mount with a 100mm L/70 monobloc A-214 cannon. The high rate of fire is achieved by water cooling for the A-214 cannon and an automatic loading system. The large steel turret holds two ammunitions drums with a total of 174 rounds. The AK-100 is used in conjunction with the MR-114 or MR-145 fire control radar. Alternatively, there is the remote optronic analog control system and the Kondensor-214A sight on the mount itself. 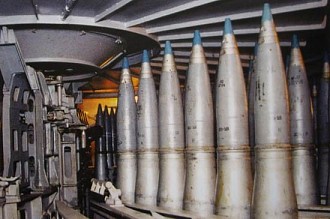