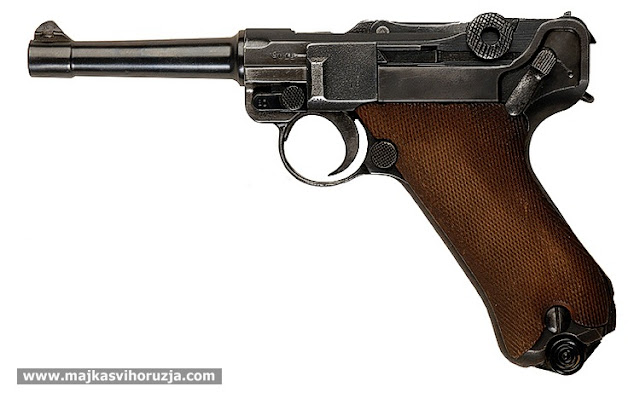 The Pistole Parabellum 1908—or Parabellum-Pistole (Pistol Parabellum)[2]—is a toggle-locked recoil-operated semi-automatic pistol. The design was patented by Georg J. Luger in 1898 and produced by German arms manufacturer Deutsche Waffen- und Munitionsfabriken (DWM) starting in 1900 with other manufacturers such as W+F Bern, Krieghoff, Simson, Mauser and Vickers;[3] it was an evolution of the 1893 Hugo Borchardt–designed C-93. The first Parabellum pistol was adopted by the Swiss army in May 1900. In German Army service, it was succeeded and partly replaced by the Walther P38 in caliber 9×19mm Parabellum.

The Luger is well known from its use by Germans during World War I and World War II, along with the interwar Weimar Republic and the postwar East German Volkspolizei. Although the P.08 was introduced in 7.65mm Parabellum, it is notable for being the pistol for which the 9×19mm Parabellum (also known as the 9×19mm Luger) cartridge was developed. Because of its association with Nazi Germany, the pistol has been used in fictional works by many villainous characters over the past several decades.

First, Luger used the 7.65 mm (.30 Luger) caliber and was used by Swiss army at the beginning of the 20th century (1900). After that, the basic design was changed depending on which army used it. So far produced more than two million copies by different manufacturers and at least 35 major variants that until now there are innumerable sub-versions. Gun P 08 was one of the main varieties. since 1908 P 08 was used in the German army. He represented the standard German gun until 1938 when it was replaced by Walther P 38. Basic caliber which used P 08 9 mm Parabellum (the name comes from the Latin phrase Si vis Pacem parabellum - if you want peace, make preparations for war) which was made for this gun.

The practice has proved to be extremely durable and reliable gun. The only reason was withdrawn from service lies in the fact that was process  Manufacture very demanding. The process itself of production was expensive, takes a long time and production of parts was very complicated.

At the end of 1942, was made the last copy of the German P 08, but his successor (Walther P 38) never managed to push out of the service. Since 1945 occasionally appeared commercial editions P 08 (late 60's Mauser / Interarms began to make identical copies of P 08), and this trend continues to this day.

Luger had been one of the most respected war trophies in the first and the second world war. And as such, they are very appreciated among collectors. 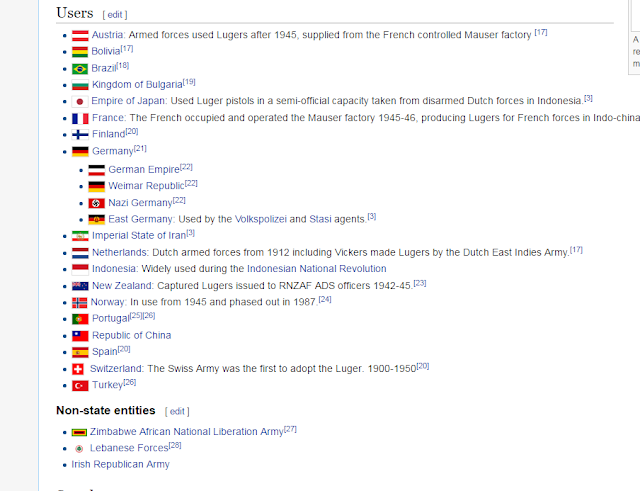