In the 12 squadrons were deployed attack hunters domestic production for close air support (165 aircraft Eagle-2, Super Galeb and J-21 Eagle, and older P-2 Kraguj). They were armed with AGM-65 Maverick air-to-ground missiles American made or Soviet A-7 and A-9 missiles. In the nine squadrons were deployed 130 Soviet MiG-21 interceptors, largely outdated and armed Soviet air-to-air missiles AA-2 and similar outdated or something more modern AA-8 missiles.

During World War II, the main task of the RV was the struggle against the occupiers and their collaborators, for the liberation of the country and the establishment of social order, designed by the Communist Party of Yugoslavia. Immediately after the war, the tasks have been reduced to preserve the established order and the protection of foreign intervention. 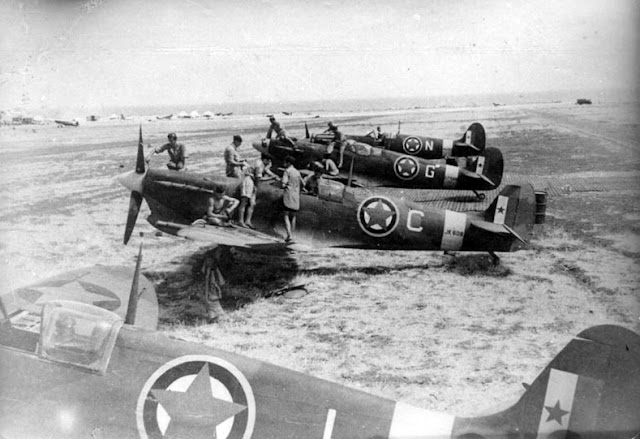 Yugoslav People's Army was created in the National Liberation War, against the invaders. It is also the part of it, the Air Force and Air defense, created during the war and to 21 May 1942, with two pilots defector from the NDH to the free territory, which was controlled by partisans in the Bosnian Krajina. In this initial period was called the "former Yugoslav Air Force", all the way to the formation of special units for Air defense (PVO) and their integration into a single type of Air Force and Air defense (the Air Force), 1959.

Historical events, related to the creation and strengthening of the Air Force in the National Liberation War, were:

The post-war period of development

Immediately after the war ended, tasks of RV, were similar to those for the entire JNA:
In addition to continuous professional development and increase the level of training of the entire composition of the RV was performed and its organizational and structural upgrade, looking at prospects and strategic role of this vision of the armed forces of the country, as part of its geopolitical position in the world. They were formed:

Due to the political conflict with the Soviet Union, aborted delivery of spare parts and materials.
Accelerated was done on the development of the domestic fighter S49, which is mass produced in Icarus (aircraft factory). Josip Broz Tito, symbolically handed over the aircraft to operational use, 21 May 1950, at Zemun Airport.
in the period from 1962 to the beginning of the 80s from the Soviet Union was purchased 216 copies of which were still some in operational use. We supplied aircraft and other purposes, helicopters and PVO resources.
Developed and manufactured school-jets G-2 Galeb G-4 Super Galeb, for primary education Utva 75 and the first prototype Laste and fighter-bomber J -21 J -22 and Hawk Eagle.

Airports and other infrastructure

The Yugoslav Air Force has begun with the first improvised partisan improvised runways for takeoff and landing light plane, near the village Međuvođe, but at the end of its existence is disposed with a premium, such as Batajnica Airport, Zeljava (near Bihac) and many others.

After the sixties, principally made on building the modern underground and above-ground shelters and shelter, aircraft and personnel, with resulting in an increase in the toughness of the entire Air Force. A special characteristic example is Air Base Zeljava.

Has been established and maintenance a large number of alternative and of the spare airport, around Yugoslavia. In the Rajlovac was a Department of overhauling aircraft engines and Aeronautical Technical Military Academy.

In 1991, the deeply-rooted grievances that had been threatening the unity of the Federal state for some time finally came to a head when Slovenia initiated moves towards independence. At the end of June 1991, the JRViPVO was tasked with transporting soldiers and federal police to Slovenia. The Slovenes resisted this re-imposition of central control, which rapidly escalated into an armed conflict. Two air force helicopters were shot down while the JRViPVO launched air strikes on TV transmitters and Slovenian territorial defense positions. After a political agreement, the federal forces left Slovenia.

Meanwhile, armed conflict had broken out between Croatian and Serbian forces in Croatia. The JRV flew several low passes in a show of force against Croatia and launched a number of strikes. In August 1991, the Serbian-dominated federal government began an open war campaign against the Croats. The JRV was active providing transport and close air support missions to ground forces but was gradually forced to abandon air bases outside of ethnic Serbian-held areas. The hostilities were ended by a truce on 3 January 1992. The JRV equipment in Bosnia and Herzegovina was given to the new Republika Srpska Air Force and used during War in Bosnia. The bulk of the SFRY air force was inherited by the FR Yugoslavia Air Force. 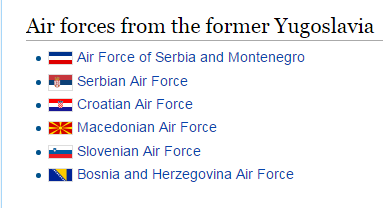