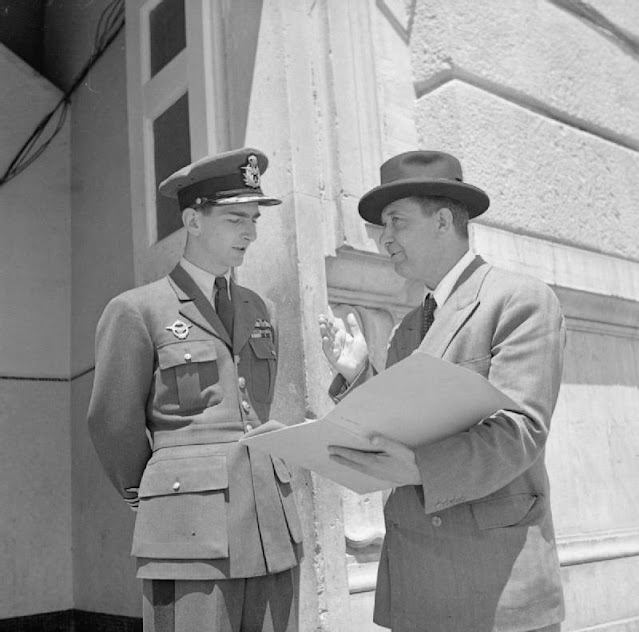 King Peter II in conversation with Ivo Šubašić,  1942. -           The Prime Minister of the Kingdom of Italy, Benito Mussolini, issued a decree regulating the relations between the military and civilian authorities in the annexed territory of Yugoslavia, which entrusts the defense of public order to the military authorities. Advisory council of the High Commissioner's office from the province of Ljubljana and Benito Mussolini -           The Communist Party of Yugoslavia and the General Staff of the National Liberation Movement for BiH sent a proclamation to the people on the occasion of the open betrayal of the Chetniks in eastern Bosnia: they explain in detail the goals and motives of the betrayal of the Chetnik leadership; call on the fighters of the Chetnik units to join the National Liberation Movement detachment and continue the liberation struggle together with the partisans; they pay tribute to the partisans of eastern Bosnia and call on them to work even harder in the
Post a Comment
Read more 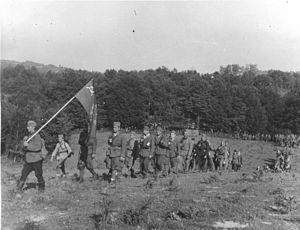 Soldiers of the Second Proletarian Brigade march through eastern Bosnia, July 1943. The Second Proletarian People's Liberation Strike Brigade, also the Second Serbian Brigade, was formed by order of the Supreme Staff of the People's Liberation Army and Partisan Detachments of Yugoslavia on March 1, 1942, in Čajniče, by fighters from the Užice, Čačak and Second Šumadija Partisan Detachments. On the day of its formation, it had four battalions with about 1,000 fighters.   The first commander of the brigade was Ratko Sofijanic, a national hero, political commissar Milinko Kusic, a national hero, and the party leader and deputy political commissar Spasenija Cana Babovic, a national hero.   Ratko Sofijanic commander of the 2nd Proletarian Brigade The Second Proletarian NOU Brigade covered about 24,000 kilometers on its war journey. About 15,000 fighters from all over Yugoslavia fought in its ranks. It destroyed about 62,000 enemy soldiers. She gave a large number of leadin
Post a Comment
Read more 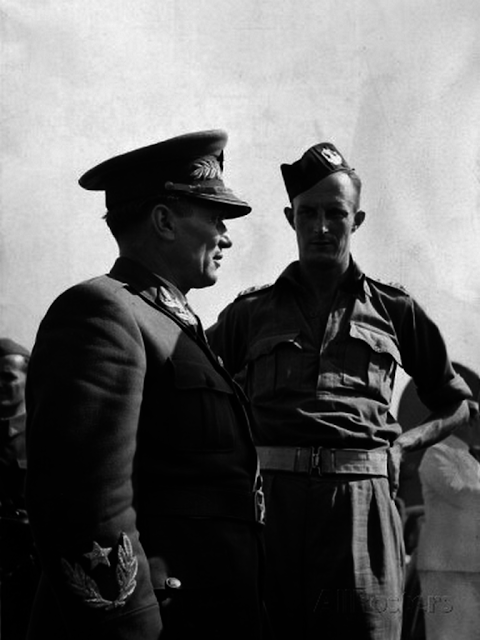 Tito talking to Maclean   Sir Fitzroy MacLean is a famous Scottish soldier, writer, and politician. He was the head of the British military mission to the Yugoslav Partisans. Maclean wrote several books, including Eastern Approaches, in which he recounted three extraordinary series of adventures: traveling, often incognito, in Soviet Central Asia; fighting in the Western Desert campaign, where he specialized in commando raids behind enemy lines; and living rough with Josip Broz Tito and his Yugoslav Partisans while commanding the Maclean Mission there. It has been widely speculated that Ian Fleming used Maclean as one of his inspirations for James Bond. Fitzroy MacLean on Vis in 1944. Before the war, he worked under the name Safford Cripps at the British Embassy in Moscow. Fitzroy Maclean was Churchill's friend and the trusted man whom Churchill promoted to brigadier general at just 36, and sent to Yugoslavia "to find out who was killing the most Germans to help them kil
Post a Comment
Read more

Interesting facts and figures on the Balkans in June 1942 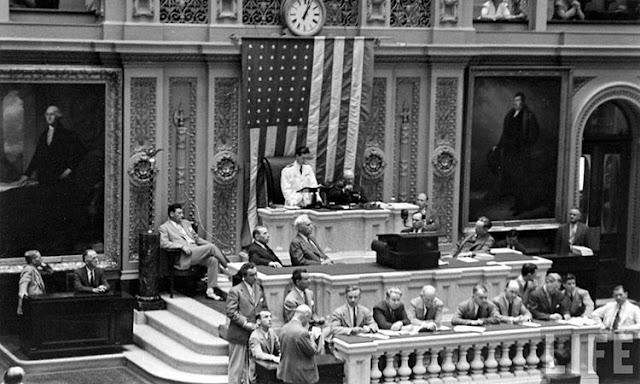 King Peter II delivered a speech to Congress on June 25, 1942. Source Ministry of Foreign Affairs of the Republic of Serbia June 1 - Gen. shot in Bulgaria. Vladimir Zaimov for spying for the USSR. Monument Vladimir Zaimov, Pleven June 2 - September 11 - The BBC publishes lists of Nedićs and Ljotićs placed under the "letter Z" ("intimidate"), some of whom were killed by Chetnik troikas. The black troikas were three-member Chetnik formations for the liquidation of political opponents by slaughter. Although they were founded to liquidate the occupier's associates, many communists, fighters, and sympathizers of the resistance movement and members of their families came under attack. Chetnik trio slaughters. One of those present reads the verdict. June 7 - Metropolitan Hermogenes enthroned as Patriarch of the Croatian Orthodox Church. June 7 - Aris Velouchiotis declares the beginning of the struggle of the Greek National Liberation Army (ELAS), the military w
Post a Comment
Read more

"Tito's state" in the heart of occupied Europe - Republic of Bihać 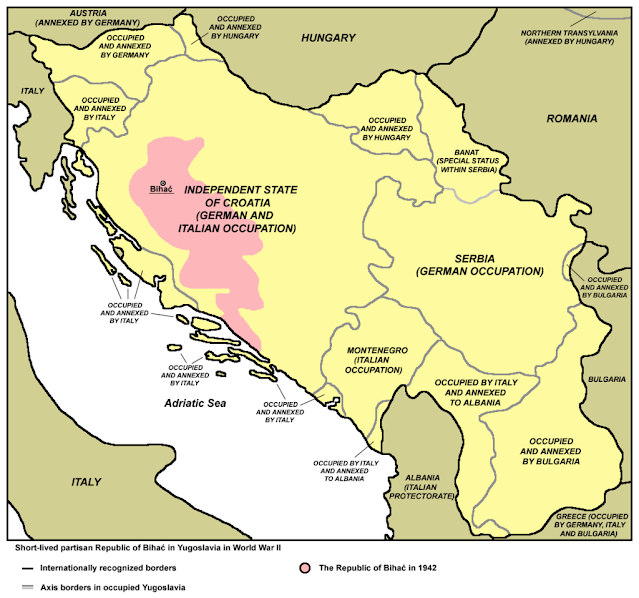 The Republic of Bihać occupied Yugoslavia (pink). The borders are that of the World War II Axis partition of Yugoslavia, including the collaborationist puppet state, the Independent State of Croatia. The Bihać Republic was a vast partisan free territory created after the Bihać operation and the liberation of Bihać on November 4, 1942, by merging the liberated territories of the Bosnian Krajina and neighboring areas of Croatia.   From the beginning of November 1942 until the end of January 1943, Bihać was the center of the free Yugoslav territory, which stretched from the approaches to Karlovac and Zagreb, to the rivers Bosna and Neretva, covering about 50,000 km.   The development of the national liberation movement reached its highest level in this territory. In November 1942, the first divisions and corps of the People's Liberation Army of Yugoslavia were formed there, and the actions of the Supreme Headquarters succeeded.   The territory of the Republic of Bihać wa
Post a Comment
Read more 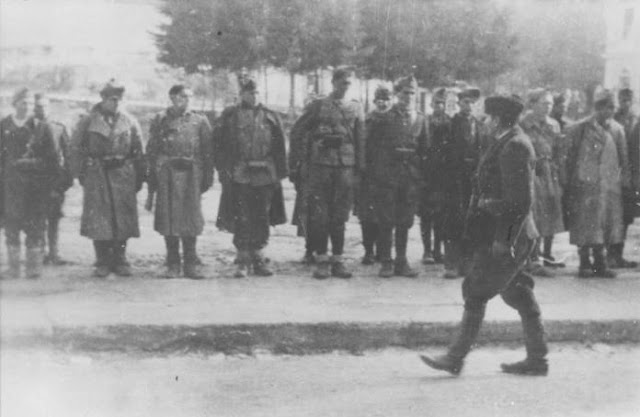 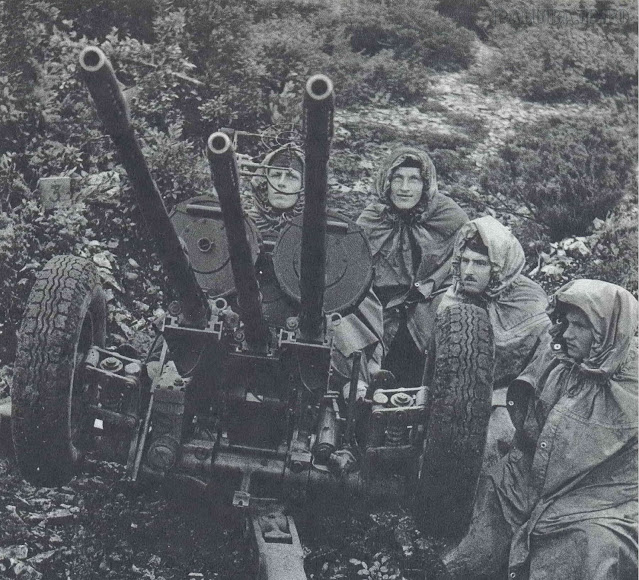 Until the mid-1950s, Yugoslav People's Army units were equipped with air defense equipment of trophy origin, along with air defense equipment of Soviet and American origin. In the mid-fifties, the modernization of the first LPAA LPAA (light anti-aircraft artillery) began, which is most represented in the units of the Yugoslav People's Army. A 20/3 mm PAT license was purchased from the Swiss company Hispano. At the end of the fifties, a license for PAT 40 mm L70 with ammunition was purchased from the Swedish company Bofors. However, that program was abandoned at that time. As the speed of fighter jets increased significantly in the early 1960s, the focus of LPAA modernization shifted to new targets as well as devices to increase the ability to track fast targets. With old devices, it was simply no longer possible to follow fast planes, especially in sweeping flights. A mechanical sighting device for AA gun 40 mm M1 was developed, followed by a sighting device of the same t
Post a Comment
Read more
More posts