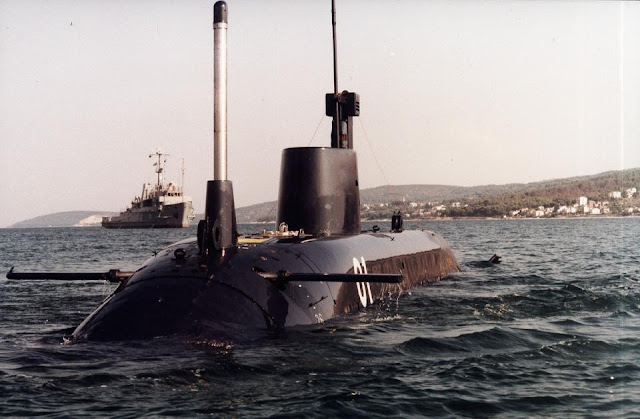 The Una-class submarine (also known as Type 911) was a class of six midget submarines built for the Yugoslav Navy at the Brodogradilište specijalnih objekata (English: Special objects shipyard) during the 1980s. They were designed with the purpose of laying small minefields and transporting naval special forces, with or without their submersibles, in shallow waters that were inaccessible for larger submarines. Due to their mission profile that called for a small design as well as the need to stay undetected, they lacked torpedo armament and a generator for battery recharging.

During the Croatian War of Independence and the dissolution of SFR Yugoslavia, five of the six boats were relocated to Boka Kotorska where they served with the SR Yugoslav Navy. One, Soča (P-914), was captured in drydock by Croatian forces. It was later modified and entered service with the Croatian Navy as Velebit (P-01). All of the boats have since been decommissioned.

During the 1970's the Brodarski Institute (BI) from Zagreb started working on a new class of submarines for the Yugoslav Navy (JRM). The project, designated B-91 and led by Lieutenant Colonel Davorin Kajić, was tasked with developing a class of midget submarines capable of operating in the shallow waters of the northern Adriatic. Using their small dimensions, the submarines were to be able to maneuver in depths as shallow as 10 meters (33 ft); such abilities were needed to conduct offensive minelaying near the enemy coastline, reconnaissance, and transporting naval special forces in hostile waters.

All six boats were completed from 1985 to 1989 at the Brodogradilište Specijalnih Objekata (BSO) in Split, SR Croatia and named after rivers in SFR Yugoslavia: Tisa (P-911), Una (P-912), Zeta (P-913), Soča (P-914), Kupa (P-915) and Vardar (P-916).[3] Further planned improvements included the addition of a Stirling engine, either by refitting the existing boats or building a new, seventh one, but the imminent breakup of Yugoslavia happened before anything was realized

All six boats were in service with the 88th submarine flotilla of the JRM with Lora Naval Base being their homeport. At the start of the Croatian War of Independence all boats except Soča were relocated to Montenegro without participating in combat operations. Croatian forces captured Soča in drydock at the BSO where it was undergoing an overhaul. Soča underwent a modification program that improved its autonomy by installing a diesel generator. It was recommissioned, now with the Croatian Navy, in 1996 as Velebit (P-01) and remained in service until the early 2000s when it was declared redundant. The remaining boats entered service with the new SR Yugoslav Navy. The first ones to be decommissioned sometime between 1997 and 2001 were Tisa and Una. In 2003 a decision was made that the ongoing major overhaul of Kupa would stop; the boat was decommissioned and broken up in 2008. It appears that the last Una-class boats in service with the SR Yugoslav Navy were Zeta and Vardar, both of them being decommissioned in 2005.
the_air_force_and_navy