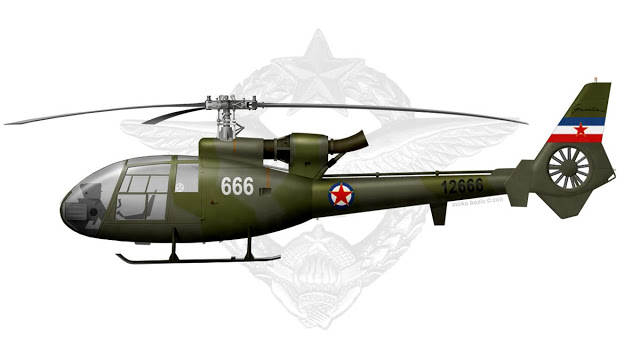 In the final sequence of the new Coca-Cola animated commercials "Videogame", which recently began to spin on Croatian television channels, screen flies combat helicopter, from which fall out of people, and in the background is well-known soft drink bottles. Many viewers stunned when they saw that in  the animation used Gazella helicopter, which was used in the JNA. Indeed, on the tail of helicopter can clearly see the flag of Yugoslavia, and on the trunk of his mark Air Force SFRY. The Croatian branch of Coca-Cola did not know that in the video is located a helicopter of the JNA while the portal 24sata is not asked for an explanation.

After that, they check the final scene and "truly determine the presence of controversial elements". Immediately we completely stop broadcasting controversial commercials and our head office warned that it may have an additional check with the relevant external creative agencies and launched modify advertising - said Sandro Baričević from Coca-Cola. With apologies to those viewers that the spot could  hurt, says the commercial taken from international Coca - Cola Centre. During testing, no one noticed the disputed items. They claim that there is no possibility that the spot still continue to rotates in the other countries around the world. The commercial side worked by foreign team of animators, and was first aired during the Super Bowl, the final championship in American football.