Sir Fitzroy MacLean is a famous Scottish soldier, writer, and politician. He was the head of the British military mission to the Yugoslav Partisans.

Maclean wrote several books, including Eastern Approaches, in which he recounted three extraordinary series of adventures: traveling, often incognito, in Soviet Central Asia; fighting in the Western Desert campaign, where he specialized in commando raids behind enemy lines; and living rough with Josip Broz Tito and his Yugoslav Partisans while commanding the Maclean Mission there. It has been widely speculated that Ian Fleming used Maclean as one of his inspirations for James Bond.

Before the war, he worked under the name Safford Cripps at the British Embassy in Moscow.

Fitzroy Maclean was Churchill's friend and the trusted man whom Churchill promoted to brigadier general at just 36, and sent to Yugoslavia "to find out who was killing the most Germans to help them kill even more." Brigadier Fitzroy McLean was the head of the British military mission at the Supreme Headquarters of the People's Liberation Army and the Partisan Detachments of Yugoslavia in World War II since 1943. Although Churchill's sympathies were initially on the side of Mihailovic and the Yugoslav royal government in London, the British intelligence service came to the conclusion that partisans in Yugoslavia were fighting the fascists much more seriously than the Chetniks, after which the Allies began to help them.

On 25 Jul 1943, Churchill met Maclean at Checkers, the Prime Minister's country house, northwest of London. During the evening, the PM announced that Mussolini had resigned. He then told Maclean:

"This makes your job more important than ever. The German position in Italy is crumbling. We must now put all the pressure we can on them on the other side of the Adriatic. You must go in without delay."

"So long as the whole Western civilization was threatened by the Nazi menace, we could not afford to let our attention be diverted from the immediate issue by considerations of long-term policy. We are as loyal to our Soviet Allies as we hoped they were to us. Your task is simply to find out who is killing the most Germans and suggest means by which we could help them to kill more. Politics must be a secondary consideration. "

Fitzroy MacLean, along with the partisans, was on various battlefields throughout Yugoslavia. Among other things, he arrived in Belgrade with members of his mission during the operations for his liberation in 1944. On January 6, 1945, Yugoslav Marshal Josip Broz and the head of the British military mission Fitzroy McLean signed an agreement to establish an airbase near Zadar for the Allied air force. in the fight against German forces. Fitzroy McClain nurtured a strong emotional connection with Montenegro, about which he once said: "If I were ever born again, besides Scotland, I would like to live in Montenegro, and to be defended by Montenegrins in the most difficult moments of life."

He published his memories of the Second World War from the territory of the former Yugoslavia in the book War in the Balkans. [6] He also wrote several works about Tito. The last book about the Yugoslav leader, "Illustrated Biography of President Tito", was published a year after Tito's death.

After a long period of observation, investigation, and feedback from officers in the field, Maclean drafted his report. In it, he stated that the partisans, whatever their politics, were fighting the Germans most effectively. They were more numerous, better led, organized, and disciplined than the Chetniks, who were largely either not fighting at all or fighting with the Germans against their own countrymen. At that time, the partisans were containing a dozen or more enemy divisions and by increasing the "practically non-existent supplies" to them and giving them air support, the Allies could ensure that they continued to contain this force. Their operations, if coordinated, could be of direct assistance to the recently arrived Allied armies in Italy. 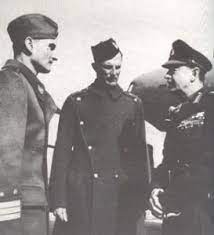 Finally, Maclean had stated that the Allies were getting little or no return militarily from the arms they had dropped to the Chetniks and that they were used against the partisans, who were fighting the Germans, and were impeding rather than furthering the war effort. He concluded that, purely on military grounds, the Allies should stop supplies to the Chetniks and "henceforth send all available arms and equipment to the partisans."

About Chetniks and partisans

MacLean, as a British field liaison officer, testified that the partisans fought far more effectively against the Germans than the Chetniks, who generally did not fight:

“My mission was of a military nature; I have been told that politics is secondary; the most important thing is who is fighting against the Germans. There was no doubt about that. The Partisans, whatever their policy, fought against them with great success, and the Chetniks, no matter how they looked at their motive, mostly did not fight or fought together with the Germans against their own compatriots. “


"It seems that we got little or nothing for the weapons we threw away the Chetniks, which they have received much more than us than the partisans. In fact, so far they have used it against the partisans, who fought against the Germans, and they bothered but did not contribute to the war effort. Therefore, it would be logical, for purely military reasons, to stop supplying the Chetniks and to send all available weapons and all equipment to the partisans. "