The Army (initially the Land Forces) was a land component of the armed forces of the NDH (Home Guard) from 1941 to 1945. The Home Guard also included the Navy and the Air Force.

At the beginning of the creation of the Independent State of Croatia, various names appeared - Croatian Army, Land Forces, Croatian Land Army. However, with the establishment of the Ministry of Home Guard and the General Staff, the name Ground Forces began to be used. With the establishment of the Ministry of the Armed Forces (MINORS) in January 1943, the name Home Guard was increasingly used for the Army, while only members of the Army were called Home Guard, initially unofficially and later more and more officially. That is why even today the name home guard is often misused only for the army.

In the first months of the Independent State of Croatia, the headquarters and then the command of the land forces were established. On April 16, 1941, the first commander of the ground forces became Infantry General Slavko Štancer, and he was soon replaced by Lieutenant General Vladimir Laxa.

The Home Guard's ground army was initially limited by the Germans to 16 infantry battalions and two cavalry squadrons - a total of 16,000 men. between May and June 1941. It was organized into 5 divisional areas (a structure inherited from the Yugoslav army) with a total of about 55,000 soldiers.

On November 1, 1941, the reorganization of the Ground Army began. It is divided into 3 assembly areas with headquarters in Sisak, Banja Luka, and Sarajevo. Each choir consisted of two divisions with associated armored, engineering, pioneer (reconnaissance), and other battalions and companies.

Conventional infantry divisions were too cumbersome for the partisan mode of combat, so in September 1942 four special mountain brigades (1-4) were formed, each with two regiments with four battalions of 1,000 soldiers, a mountain and machine-gun company,

The NDH Army mostly used only light and obsolete armored vehicles. Somewhat more powerful, though still obsolete, weapons would be introduced a few months after the capitulation of Italy, and more modern weapons were introduced in very small numbers, and only in late 1944 and early 1945. However, their main partisan opponents themselves had no better equipment. at least until the arrival of the First Tank Brigade of the NOVJ on the battlefield in the fall of 1944. 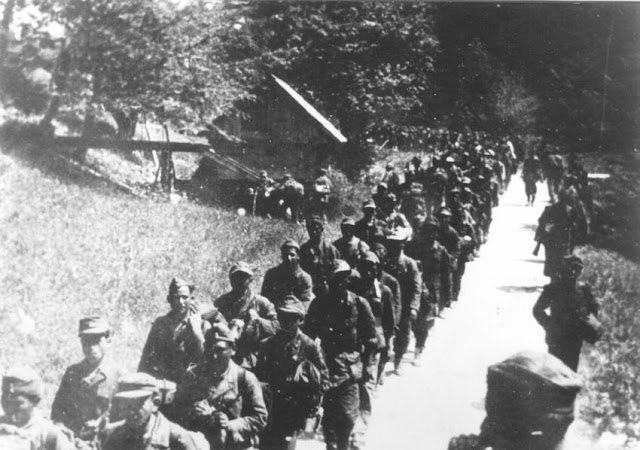 Members of the Army wore various helmets - those leftovers from the Yugoslav Army with a distinctive groove in the middle, made in France, then Italian and mostly German helmets.