List of Axis concentration camps in Yugoslavia in WW2 PART I

During World War II, there were dozens of concentration camps in the NDH. They were established and ruled by either the Ustashas or the Nazis or the Fascists. Some were death camps, some detention camps for prisoners and undesirable persons (partisans, communists, "racially undesirable persons"). After the defeat of the Axis powers, the camps were closed in 1945.

The Jasenovac camp was the largest death camp in the Independent State of Croatia, in entire occupied Yugoslavia and in the entire Balkans during the Second World War. In addition, it served as a concentration, labor, penitentiary, and prison camp.

The system of Jasenovac concentration camps, located near the settlement of Jasenovac, was run by the Ustasha authorities of the Independent State of Croatia. This was the only concentration camp in World War II in which it was systematically killed without the participation of the Germans. The camp operated for 1,337 days from 1941 to 1945, just before the collapse of the Independent State of Croatia. Members of undesirable ethnic groups such as Serbs, Jews, and Roma, as well as political opponents of the Ustasha regime such as communists, leftists, and other anti-fascists, were detained and executed in the camp.

The camp complex consisted of a series of sub-camps located on the banks of the Sava River in an area of about 240 square kilometers. The largest camp was near Jasenovac itself. Opposite it, on the right bank of the Sava (in today's Bosnia), there was the Donja Gradina camp. Camp "Jasenovac" also had 3 camps for children: "Sisak", "Gornja Rijeka" and "Jastrebarsko". There was a special women's camp in Stara Gradiška. Due to the size of the camp complex, the Germans are "Jasenovac" called "Balkan Auschwitz" (it. Auschwitz des Balkans).

There are significantly different estimates of the number of victims of the camps, which were often manipulated for political purposes in the years after World War II. Estimates based on demographic data, as well as lists of victims, place the number of killed between 70,000 and 90,000 (men, women, and children), making the Jasenovac camp the largest execution site in Southeast Europe during World War II.

"Undesirable persons", mostly Serbs, Jews, Roma, and Croats, were exterminated in the camp, and a large number of women and children were killed. It was originally conceived as an Ustasha camp for the re-education of Croat political prisoners. It was the fifth camp of the Jasenovac camp.

According to the list of victims of the Jasenovac Concentration Center, Jasenovac Memorial Site, which includes research until August 31, 2007, the names and data for 12,790 people killed in the Ustasha camp in Stara Gradiška have been determined. Other estimates reach up to 75,000 victims.

Most of the detainees from the Ovčara labor camp near Gospić were brought to the Ustasha camps Slana (for men) and Metajna (for women) on the island of Pag, founded on June 25, 1941. Along with Jadovno on Velebit, these were the first camps in which detainees were killed en masse. They were abolished in August 1941, due to the Italian occupation of the area in which they were located.

The Jadovno camp was a concentration camp in the Velebit valley, west of Gospić, which was run by the Ustashas during the NDH in 1941. It served as a place to exterminate "undesirable persons." The number of victims is unknown, although some cite between 30,000 and 40,000 people, mostly Serbs, Roma, Jews and Croats. Many communists from Zagreb were also killed in it: one of the victims was Milan Bakić Baja, a communist of Serbian origin. Politician Vladimir Malančec was also in Jadovno and barely survived. 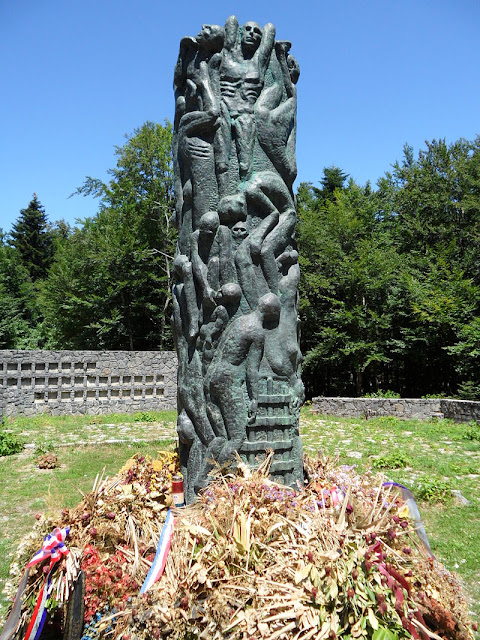 The camp operated from April 11 to August 25, 1941, on the orders of Eugene Dida Kvaternik. The camp system consisted of the 'Yellow House', the prison in Gospić, the camp on Velebit, and the camp Slano on the island of Pag. Numerous convoys that arrived by train from all over Croatia and on foot to Velebit ended up in the camp, which was built by several hundred young Jews from Zagreb. Only a few survived the arrival in Gospić and Velebit. The whole story ended at the end of August 1941 when Italian forces occupied the so-called second zone, ie the territory in the Dalmatian hinterland and Lika in which until then the NDH had civil and military power. Ustasha troops had to withdraw from all locations where the mentioned camp system operated. It was one of the tragic events of the rule of hatred during the brutal dictatorship of the Ustashas in those areas.

A list of victims by name compiled by the Yugoslav authorities in 1964 killed 1,794 people in the Gospić-Jadovno camp system. According to the findings of the Italian army, which closed the Jadovno-Gospić camp system run by the NDH authorities in 1941, 791 killed were found in its "branch" on the island of Pag. Various estimates made by unreliable methods number between approximately 15,000 and over 70,000 victims.