Battle for Crete known code-named Operation Mercury was the largest airborne operation carried out by the German parachute regiment during World War II. The battle began on 20 May 1941 and ended the German Pyrrhic victory because the losses of German airborne forces were extremely high. Negative experience gained during the Battle for Crete forced the German military leadership to make a decision on cancellation of the planned large-scale airborne operations for which the German parachutists to the end of the war, fought as infantry.

The Battle of Crete was the first occasion where Fallschirmjäger (German paratroops) were used en masse, the first mainly airborne invasion in military history, the first time the Allies made significant use of intelligence from the decrypted German messages from the Enigma machine and the first time German troops encountered mass resistance from a civilian population. Due to the number of casualties and the belief that airborne forces no longer had the advantage of surprise Adolf Hitler became reluctant to authorize large airborne operations, preferring instead to employ paratroopers as ground troops. In contrast, the Allies were impressed by the potential of paratroopers and started to form airborne assault and airfield defense regiments.

Crete at that time represented a very important strategic base from where the British air force could bomb the oil fields at Ploesti in Romania. On 28 March 1941 the Germans were experienced the defeat of the British Navy and they decided to occupy the island of Crete with an Airborne Assault.
At 08:00 on 20 May 1941, German paratroopers, jumping out of dozens of Junkers Ju 52 aircraft, landed near Maleme airfield and the town of Chania. The Germans managed to put down 8000 paratroopers but their position was extremely difficult due to large losses. The Germans suffered many casualties in the first hours of the invasion, a company of III Battalion, 1st Assault Regiment lost 112 killed out of 126 men and 400 of 600 men in III Battalion were killed on the first day. On 21 May the British navy managed to destroy a German convoy carrying reinforcements to the island but to 25 May, the German had managed to bring about 18000 soldiers on Crete.

Defense lawyers of the island who were aware that if they want to defend Crete need to regain the airport at Maleme organized a counterattack in the night between 21 and 22 May. A counterattack was launched by two New Zealand battalions. Fears of a possible naval assault resulted in the fact that the other units that were otherwise unable to be engaged in this counterattacks remain in their positions even though the fear of naval landing was quite unfounded given the presence of a strong naval forces of the British Royal Navy in the waters around Crete.

New Zealanders were attacked during the night but were met with defensive positions prepared by German paratroopers, who were possessed by fresh troops, the German fifth Mountain Division. Persistent Defense refused to attack the allies and prevented them to regain airport. From this point onwards the Allied forces were slowly retreating to the eastern part of the island in an attempt to avoid encirclement by all the stronger German forces. 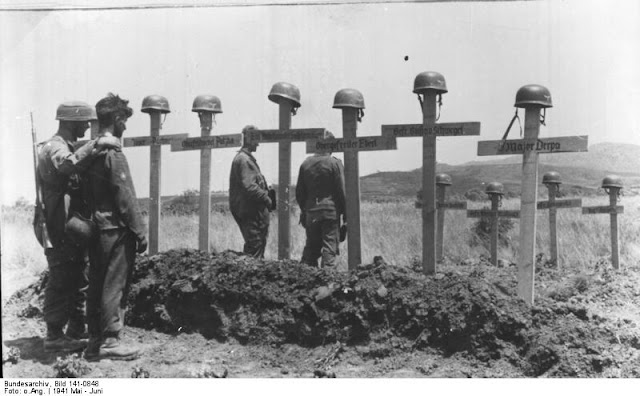 Command in London finally admitted that the thing is lost and ordered the withdrawal of allied forces over Sfakia. During the next four nights in Egypt were evacuated 16,000 soldiers. A small number of soldiers evacuated the Heraklion them but the ships were being transported find under strong attack of German bombers and suffered heavy losses. On June 1 submitted to the last 5,000 defense lawyers Sfakia although part avoided capture and turned aside into the mountains where they continued to resist the German occupier.

During the evacuation of the British Admiral Cunningham firmly stood for the position that "the Navy not to betray the army" and in fear of army generals that the British Royal Navy to suffer heavy losses replied, "To build a ship takes three years to build traditions need three centuries. "