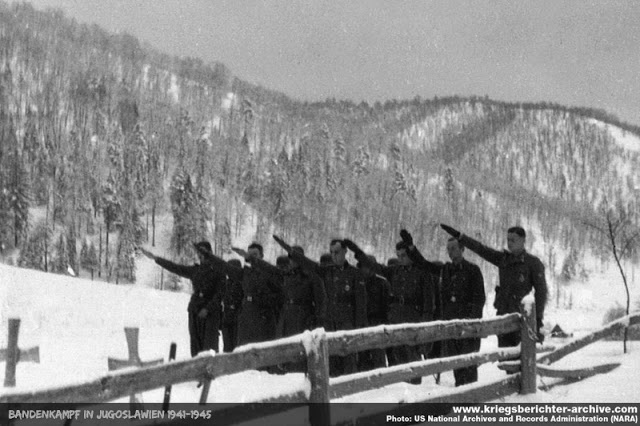 Members of the 3rd Battalion, 2nd Regiment (14th SS Regiment), 7th SS Volunteer Mountain Division "Prinz Eugen", salute the graves of their comrades killed (by the Partisans) on Christmas Eve, near the village of Duboštica (among the fallen is the battalion adjutant, SS-Untersturmführer Hans Hanel, and soldiers Weber and Binder). Two years later, most of these men will also be lying under the ground by Christmas time. Those rare few, who were temporarily spared for trial, celebrated the holiday in captivity in the following way (a memoir of Wilhelm Ebeling, officer of the "Handschar" Division, quote from the book "Forward, Prinz Eugen!" by Otto Kumm): "A good-natured NCO is on duty this evening. We asked him for permission to sing several songs and to have the lights left on a little longer. He generously granted it. Then began our Christmas. We had no candles and no pine branches [...] We softly sang some Christmas songs [...] There were gifts too. The elders had saved some cornbread in the past days. It was given to the younger, who now thought that it tasted like the best honey cakes. Several precious cigarettes also appeared from somewhere in the cell, and they were divided fairly. But soon the order 'Tišina!' [Quiet, in Serbian] came from outside, and the lights were turned out."