April 3. - The Hungarian Prime Minister Count Pal Teleki committed suicide, not wanting to take part in the invasion of Yugoslavia.

April 3. - The Talks of Yugoslav, Greek and British military representatives in Florina.

April 4. - Vlatko Macek reached Belgrade and took deputy of the prime minister. Belgrade, Zagreb and Ljubljana in the event of a state of war be declared open cities.

April 5 (in fact 6. 4. early in the morning) - signed the Pact of friendship and non-aggression of the USSR and Yugoslavia.

April 6. - The attack of Germany against Yugoslavia begins April war - the bombing of Belgrade and air bases, attack of the German 12th Army on Macedonia.

April 6 - Germany attack on Greece (Operation Marita, part of the Battle of Greece).

April 7 - Skopje Occupied - cut the main connection between Yugoslavia and Greece; also the second attack of the German Army on Slovenia and Croatia.

April 10 - German breakthrough in northern Croatia and Slovenia leads to the collapse of the front.

April 10 - As Yugoslavia "does not exist", the Hungarian government made entry into the "southern regions" (Prekomurje, Baranja, Backa), Banat in the dispute with Romania.

April 10 - Politbureau of the Central Committee of Communist Party of Yugoslavia in Zagreb decided to move to Belgrade and establish a Military Committee to resist the aggressor.

April 11/12. - Crews sank monitors "Sava", "Vardar" and "Morava" near Belgrade, Sava bridge blown down on one of the boats, with great sacrifices.

April 14. - The Yugoslav Supreme Command requested a truce, the Germans would accept only unconditional surrender.

April 15. - The King Peter II of Yugoslavia and the Government left the country; occupied Sarajevo, captured the Supreme Command of the Royal Army.

April 17 - Completed unconditional capitulation of the Kingdom of Yugoslavia (effective the next day at noon).

April 17 - Lieutenants Milan Spasic and Sergej Masera sank the destroyer Zagreb in the Bay of Kotor, sacrificing their lives.

April 22 - 24 - At a meeting in Vienna certain Italian-German demarcation line in Yugoslavia. Bosnia assigned to the ISC. 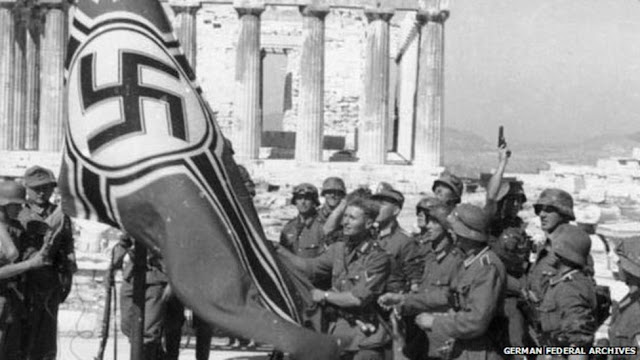 April 30 - Ante Pavelic issued a legal provision of the race, the basis for the persecution of Serbs, Jews and Gypsies.