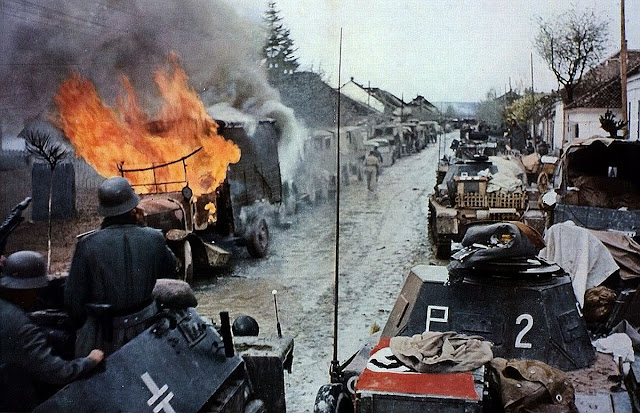 January 29. to February 17. - The Battle of Trebesin: Greeks succeed to take mountain peaks, at the cost of great sacrifices.

February 4. - The Hungarian Parliament ratified the agreement of Accession to the Tripartite Pact and the treaty of eternal friendship with Yugoslavia.

February 14. - Hitler and Ribbentrop talk with Cvetkovic and Cincar- Markovic in the Berghof, the same day Roosevelt message to the Yugoslav government: since Lend-lease will help the peoples who may be victims of aggression.

February 22. - Roosevelt message to Prince Paul - the world is watching with sympathy to the countries which resist to aggressive forces.

February 25. - Operation abstention: British commandos tried to occupy the island of Kastellorizo in the far east of the Dodecanese in the Aegean Sea.

March 1st. - Bulgaria joins the Tripartite Pact, the German Army the next day enters its territory.

March 4. - A secret meeting between Prince Paul and Hitler at the Berghof - the pressure for joining the to the Tripartite Pact.

March 6 - The Crown Council of Yugoslavia decided to join to the Tripartite Pact, under conditions which Hitler dictated (Confirmed 20. 3.).

9 - 16. March. - Italian spring offensive against the Greeks in Albania - failure.

18. March. - Roosevelt sent a message to Belgrade: a country which surrender will have less favorably than those who are at least briefly be resisted.

19th March. - Hitler's ultimatum to Prince Paul join to the Tripartite Pact in five days or following the invasion.

20. March. - After the Crown Council confirmed the decision to join to the Tripartite Pact, the three ministers resigned.

March 23. - Gen. Dusan Simovic warned Prince Paul that the Air Force could rebel if he signed a pact with the Axis; Churchill Prime Minister Cvetkovic: war will only be delayed but not avoided (in joining the Tripartite).

March 25. - Yugoslavia in Vienna joins to the Tripartite Pact, for what it promises: the preservation of integrity, without passage and transport of axial forces, will not be requested military assistance from Yugoslavia (more favorable than for other members of the Tripartite Pact) + secretly promised Thessaloniki after the war.

March 27. - Hitler's Directive 25: attacking Yugoslavia. Yugoslavia should be a smash, counting on the help of disaffected Croatians and the majority of its neighbors; Operation Barbarossa is postponed for four weeks.

28. March. - Meeting of Benito Mussolini and Ante Pavelic in Rome.

29. March. - Josip Broz Tito, Secretary General of the Communist Party of Yugoslavia, arrived by plane from Zagreb to Belgrade.

March 31 - The meeting of the "great work" of deputies HSS and representative government in Zagreb, Berlin sent a "Memorandum of Five", which claims that Yugoslavia no longer exists and asking for help and recognition of "free Croatian state". Ribbentrop's telegram to Macek - discourage him from cooperating with the Belgrade government.
Other