The Model 24 Stielhandgranate (German, "stalk hand grenade") was the standard hand grenade of the German Army from World War I until the end of World War II. The very distinctive appearance led to it being called a "stick grenade", or a "potato masher" in British Army slang, and is today one of the most easily recognized infantry weapons of the 20th century.

The stick grenade was introduced in 1915 and the design developed throughout World War I. A friction igniter was used; this method was uncommon in other countries, but widely used for German grenades.

Hand grenade Stielhandgranade 1924 consisted of the body of a thin metal filled with 170 grams of TNT, and the wooden handle containing the friction detonator deceleration 4-5 seconds. At the bottom of the handle was a cover beneath which was a rope to activate the detonator.

Due to the characteristic shape of this bomb can be thrown over 30 meters as opposed to 20 meters as far as it was possible to throw a bomb classic shapes from the same period type M2 American or British Mills MK36. 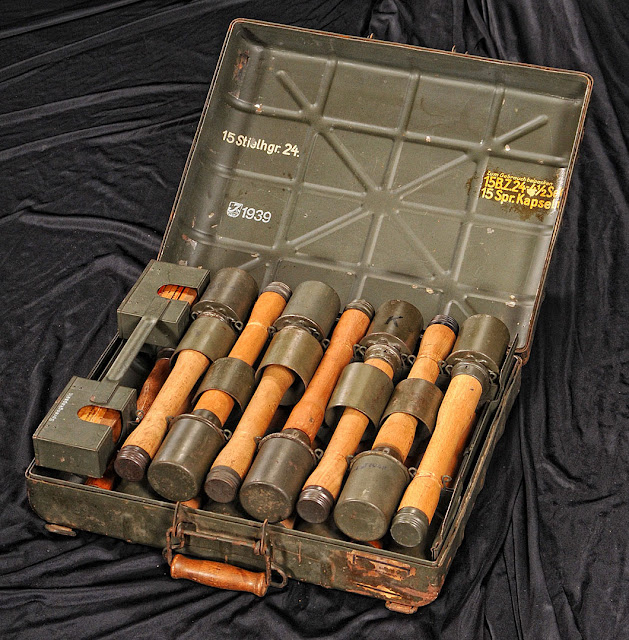 These grenades were packed in metal boxes at 16 pieces without detonators, and is on most of the body was inscribed-'VOR gebrauch Sprengkapsel EINSETZEN'-BEFORE USE SET detonator. As in the cold climate in Russia came to the failure of these bombs produced was model marked with M1924K (Kalt-cold). 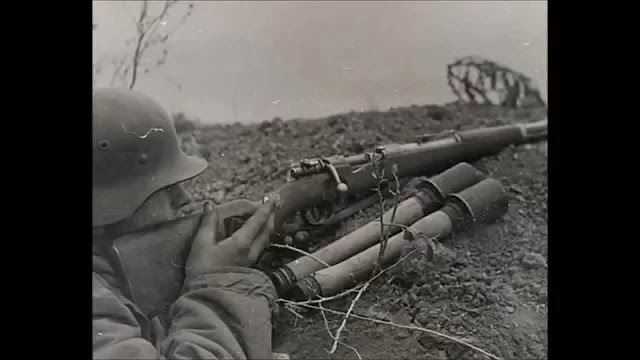 The grenades were extremely useful for clearing out entrenched infantry positions. Although they were not individually very effective against armored vehicles and fortifications, the grenade could be used in an improvised "bundle" style where additional explosive heads (without their sticks) were wired around the central stick grenade. These were known as Geballte Ladung ("bundled charge" or "concentrated charge").

The stick grenade concept was also used in the Far East by the Imperial Japanese Army as the Type 98 grenade and the Chinese National Revolutionary Army in World War II as the Type 23, and later the Chinese Communists, who supplied the locally manufactured "Type 67" to the NLF and People's Army of Vietnam.