The M24 series is a line of Mauser pattern bolt-action battle rifles produced for use by the Yugoslavian military. They are similar to the Czech vz. 24 rifle, featuring open sights, 8×57mm IS chambering, carbine-length barrels, hardwood stocks, and straight bolt handles. All M24 series weapons are designed to accept the M-24/48 pattern bayonet.

After World War I, the Kingdom of SHS (Serbs, Croats, and Slovenes) of central forces received a large amount of military equipment and weapons in various calibers, so it was necessary to standardize on one caliber. In 1924, the authorities decided to buy Belgian mavzeric M24. That same year was the standard military cartridge selected cartridge caliber 7.9 mm. Between 1925 and 1928, the Kingdom of SHS from Belgium received 100,000 rifles and 110 million charges for them.

During 1924, the Kingdom of SHS with "FN Herstal" (FN) from the Herstal near Liege signed a contract to purchase a license for the production of the latest Belgian rifles and ammunition M.1924.
Finally, the first rifle M.1924 produced on 22 March 1928. However, the government waited until October 15, the celebration of the 75th anniversary of the Institute of the production line officially and ceremoniously put into operation. Given that the capacity of the 5th department was 200 rifles per day, already by the end of 1929 guns M.24 was equipped with permanent staff, and at the beginning of the fourth decade of this century and all operational Yugoslav army.

Chetnik karabinka (Serbo-Croatian: Chetnik karabin) was a shorter version that was given to Chetnik or assault units of the royal army. For this gun was made a special a bayonet, the blade of which was mounted horizontally. Production started in 1940 and a year later with the attack on Yugoslavia ended. Were produced 5000-6000. 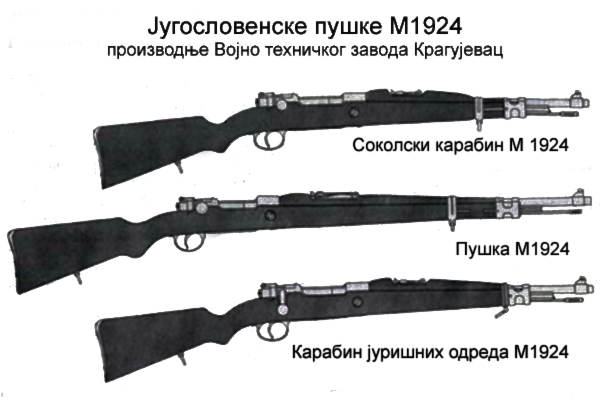 Sokolski karabin M.1924 (English: Hawk carbine M.1924) - This variant was based on the Onslaught rifle model. At 94.5 centimetres (37.2 in) it was just slightly shorter and had a straight
bolt handle. It was designed just before the Invasion of Yugoslavia.

M.24/47 Rifle - M24 Rifles and Carbines of Belgian and Yugoslavian manufacture brought up to a common standard beginning in 1947 and continuing into the early 1950s. Most received new M48 barrels with 98k type front sight hoods not found on Model 1924's. Carbine features deleted rear swivel removed and plugged with dowel front carbine sling points ground off and polished.