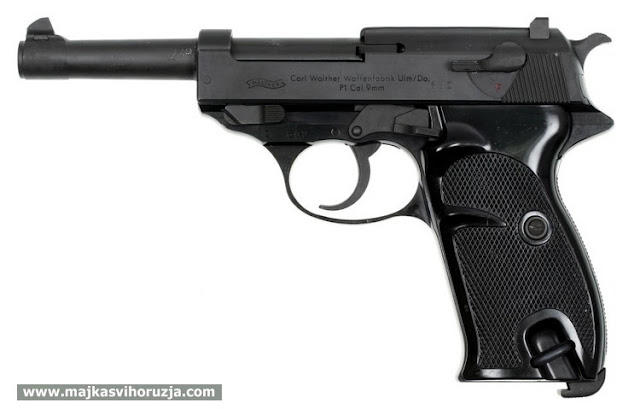 The Walther P38 (also known as a Pistole 38) is a 9 mm semi-automatic pistol that was developed by Walther's arms as the service pistol of the Wehrmacht shortly before World War II. It was intended to replace the costly Luger P08, the production of which was scheduled to end in 1942.

In the mid 30's of the last century the leadership of the Wehrmacht concluded that it is necessary to develop and introduce the use of new large military pistol good features and cheaper production costs than is the case with the famous Luger-Mauser T-08.

Create a new pistol has received a firm Walther with the concept of AP (Armee Pistol) .As the main advantage is stated that in testing fired 1,500 rounds without delay and fracture firing pin. The only criticism was that the gun should have a so-called free. a visible hitter as massive as a simple locking system-firing by type monoblock. What is adopted and weapons under the changed label HP (Heere Pistol) received 1 April 1938 years as HP-38. 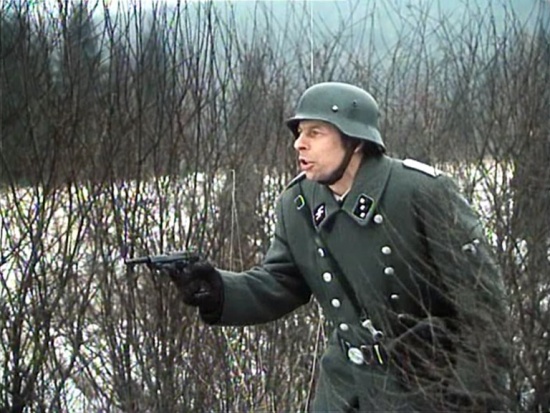 Between 1938-1940 were made the first so-called. zero series too until spring 1940 started mass production in Walther's drive Zella-Mehlis and the first re-armament in greater numbers.

During the Nazi period, 584,500 P38 pistols were produced by the Carl Walther plant in Zella-Mehlis, Thuringia, Germany. Production was stopped when the American forces captured the plant in April 1945. Weapons produced had to be inspected before they were delivered to the German Army. After approval, the weapons were stamped with an inspection stamp (Waffenamt). The Walther Waffenamt inspection stamp consisted of an eagle above the number 359 (E/359).

As the needs of the Wehrmacht was 10,000 pistols per month are engaged and capacities of the Mauser (who was ordered to significantly reduce delivery P 08, they reluctantly filed a just 1942 years) and another lesser-known facility in Germany - Spreewerck.

Closures were later produced and requisitioned plants of Czech Zbrojovka and locking systems in the factory FN Herstal in Belgium. therefore that there is great diversity in design and coding trademark weapons. also, guns were specifically have labeled the different units of the Wehrmacht and the allies of the Axis powers but there are also versions specially branded for ISC. Only in Mauser's until 1945 produced 300,000 pieces. A total in all versions produced over 1,000,000 pieces.

It massively was armed members of the crews of vehicles, artillery crews, military and police units, medical services and non-commissioned officers and junior officers.

Carried in more types of holsters.

There are also versions in a symbolic number of pieces in the caliber 45,7,65 and 22LR with an extended tube.

After the war, the mass was produced in France which was requisitioned factory in Whole-Melissa.Iz this period there was a version with a shortened tube.

In the early 60s in Germany for the needs of the Bundeswehr continued production marked P-1 in almost unchanged, except that it was later introduced the frame of aluminum. Last examples of P-1 were withdrawn from use in the Bundeswehr during 2004. There are also versions with the tag P-4, which were delivered only to the police one province. 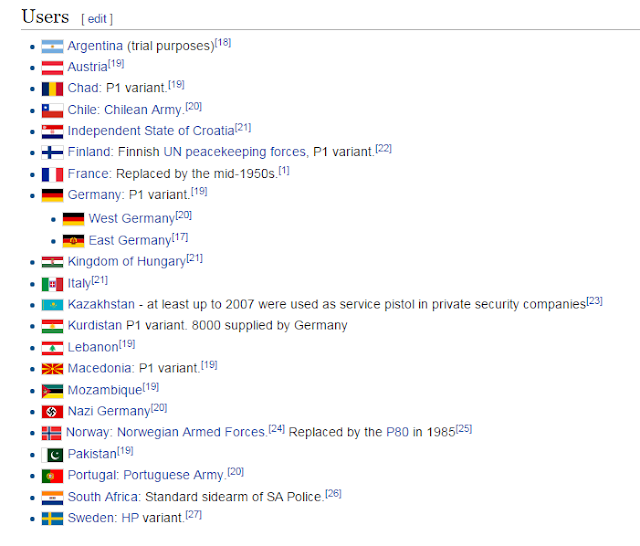 After the war, remain in use in the Army of the SFRY for many years an until the mid-60s when was made massive re-armament officially adopted the official gun CZ M-57 first in the JNA and then in various militia services for which the later could be seen by some piece, especially for members in civilian clothes.

For lovers of weapons, mass popularity has gained in war films and series.
Sources:
http://www.paluba.info/smf/index.php?topic=20097.0