Operation The ball lightning (ger. Kugelblitz), in Yugoslav terminology the Lima-Drina operations, represents the most ambitious and largest of winter anti-partisan operation in Yugoslavia 1943/1944.
Code-named " The ball lightning“ exactly pointing to the character of the operation. It was supposed to be a lightning offensive divided into two phases: the first - surroundings (the ball), the second - destruction (lightning). 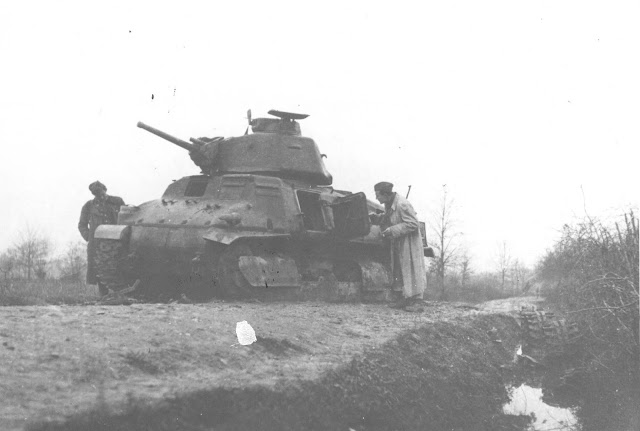 This operation is part of a series of related operations conducted by the German Second Panzer Army against the Partisan units and free territory, known as the Sixth Enemy Offensive.

The operation lasted from 4th to 16th December 1943 and affected a wide area of Raska and eastern Bosnia. The aim of the operation was causing strokes, encirclement, and destruction of units of the Second and Third Corps of the NLA that were active in this area. 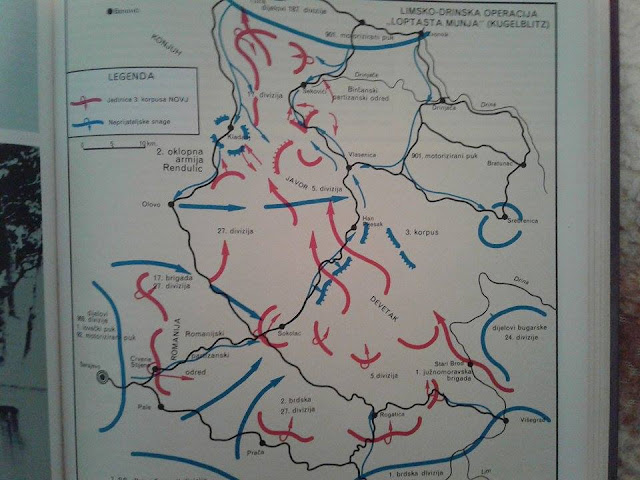 German forces managed to inflict blows and inflict significant losses to some units of the Second Proletarian and the Fifth Krajina Division and managed to conquer the cities and communications in this area, but failed in the primary intent to break and destroy. Therefore, their success was short-lived, and the Partisan units after the devolution of German forces in late December 1943 and in January 1944 re-mastered much of this territory.

A team of the South East placed the 5th SS Corps in this operation, in addition to its two divisions, two complete German divisions, four independent regiments, and a Bulgarian division.

The general concept of operation was that parts of the 369th. Legionnaires Division, 1st. Hunting and 92nd. motorized regiment in Sarajevo, parts of the 187th. backup Infantry Division and the 901st. motorized regiment from Tuzla and Zvornik and parts of the Bulgarian 24th Division quickly penetrating, possess line Sarajevo - Han Pijesak - Vlasenica - Srebrenica - Drina and surround the 3rd Corps units on the territory of Sokolac - Vlasenica - Srebrenica.

Meanwhile, the 1st Mountain Division and the 2nd regiment "Brandenburg" starts from Sjenica and 7th SS Division moving from the line Gacko - Nevesinje had a task to break the Partisan units and dismiss them to the north of the line Višegrad - Pale.

Operation "the ball lightning" has started on 3rd December 1943, early in the morning.

The Beginning of operation

The attack began action of 187th. Division and 901th motorized regiment to the road Vlasenica - Srebrenica. By the night of the 4th of December, they managed to enter the Kladanj and Sekovici where they suffered heavy losses.

The attacks from Sarajevo headed parts of the 369th. Division with 91st motorized and the 1st hunting regiment. During that time, on the river Drina were Bulgarian regiments ready to prevent possible partisans withdrawal to western Serbia. The German 1st Mountain Division attacked across the mountains Zlatar and the same day in Prijepolje to the 2nd Proletarian Division and 1st Brigade Sumadia inflicted heavy losses.

During this time, the notorious 7th SS "Prinz Eugen" division from the direction Herzegovina progressively closed the circle around 27th and 5th Partisan divisions. On 14th, December units of the 27th Division broke through the positions of the 187th Division at Han Pijesak. The 5th division is broke through the mountains Devetak and thus, come out of the German encirclement.

Operation "The ball lightning" has been engulfed and 16th Vojvodina Division in the northern part of Bosnia. However, this division was divided into groups and so skillful maneuvers avoided the German attacks.

Before the start of operation Staff of the Second, Shock Corps  exercised the reorganization of the Italian division "Venice", as well as parts of the division "Taurinenze" who taken sides with NLA (a total of about 11,000 Italians). From small parts of the division who have expressed their willingness to extend the fight against the Germans, formed the first days of December the Italian partisan division "Garibaldi". During the operation, this unit represented an additional burden for Partisan force, as they had no combat value and require the involvement of the evacuation and supply.

German forces were adapting their tactics of partisan fighting and thus were able to inflict heavy losses on the 2nd and 5th Division. During the two weeks of the last operation, the Germans were able to cruise the space between Tuzla, Sarajevo, and Sjenica. But in January 1944 the 5th Krajina division managed to retake all the lost positions.

Partisan losses were estimated at 9,000 people

- German final report of the Supreme Command of the operation "Kugelblitz" with mutual losses.
For good posture in the fight against the NLA, Colonel remold, commander of the battle group 1st Mountain Division in operation kugelblitz, on 22 December 1943, praised the Chetniks from Vojislav Lukačević, who participated in the fighting under German command.