Battle of the Neretva, also known as the Battle for the wounded, is a common name for a series of battles in the Neretva valley between Yugoslav Partisans and the Axis forces during February and March 1943. For the Germans, this was the Operation Weiss II, but in Yugoslav historiography, this was the culmination of the 4th Enemy Offensive.

Partisans' plan for the offensive:

·         Right column – the 2nd Proletarian Division was tasked to advance past Imotski and reach the village of Dreznica, occupy it and cut off the communication between Jablanica nad Mostar. After the occupation of the village, the task was to protect the right flank of the Partisans' main forces against the intervention of the Italian garrison in Mostar and to continue advancing towards Jablanica with one brigade.

·         Central column – the 3rd Shock Division had the most difficult task: to capture Prozor, Konjic, and all strongpoints in the valley of rivers Rama and Neretva,  and to open the way across the Neretva.

The Axis forces engaged in the Operation Weiss II:

The left column (1st Proletarian Division) was only partially concentrated, but they decided to go ahead with the plan using only two of its brigades. On 18th of February, they successfully captured the mountain pass Ivan sedlo and the railway station in Raštelica. Their surprise attack on Konjic failed.

The central column began their attack on Prozor on the evening of 15th February, but they failed due to the fierce resistance of the garrison. Prozor was defended by a part of the Italian Murge Division. After reciving reinforcement, the 3rd Division had recived an order from Tito (who was in the nearby Scit village). The order simpley stated: „Prozor must fall tonight!“

The second attack on Prozor began on February 23rd. During this attack, the Partisans used howitzers like mountain guns for direct targeting of bunkers and strongpoints. During the night, the Partisan units liberated Prozor. The Italians suffered heavy losses in the fight for Prozor. The Partisans captured rich war booty after the liberation of Prozor and Jablanica.

On 19th of February, the German battle group „Vogel“, consisting of the 718th Division, the 5th Ustasha Brigade (Black Legion) and artillery, advanced towards Gornji Vakuf. They captured Gornji Vakuf and then found themselves stuck in a ten-day-long battle against the reinforced 7th Banija Division ahead of Prozor.

In late February, Tito's Main Operational Group found itself in a critical situation. There was a constant pressure from the north on Prozor (the Central Hospital was there), and increasing pressure from the Italians and Chetniks from south and southeast. The 7th SS and 369th Division were approaching from the west.

In that situation, Tito decided to reverse the direction of the attack. Instead of pushing over Neretva, he decided to strike hard at the Germans preassuring Prozor. He also ordered the Pioneer company to destroy all bridges across Neretva. With this tactical move, Tito tried to bluff the Axis forces and make them think that the Partisans want to break trough in the north, not in the south.
The Partisan forces engaged for the counter attacks at Gornji Vakuf were:

The main task was to surround and destroy the German forces in Gornji Vakuf.
The attack began on March 3rd at 3 p.m. The right colum has managed to complete its mission and cover the right side.

The central column had the most difficult task. Their task was to repress units of the Battle Group „Vogel“ to Gornji Vakuf. After a fierce hand-to-hand combat,  they managed to break through the lines of the 717th Division.

The left colum progressed very slowly. Because of their delay, the German forces managed to retreat to Bugojno. The German command realized that the Partisans want to break through towards the north, but they made a wrong conclusion.

Tito did not want to continue the attack. He achieved what he wanted – to save the wounded and sick soldiers. He ordered an 180-degree turn and redirected the bulk of his army back to the Neretva.

In the night of March 6th, a group of soldiers called „thunder of the tenths“ crossed Neretva, cleaned  all Chetniks from the eastern bank and secured the bridgehead.

The same pioneer company that has destroyed the bridge constructed again a new, improvised bridge, resting on the skeleton of the old one.  The Partisans crossed the river under intense aerial bombardment. The first unit that crossed the bridge immediately got involved in the fight against the Chetniks. The Chetniks completely collapsed and never recovered after this defeat. 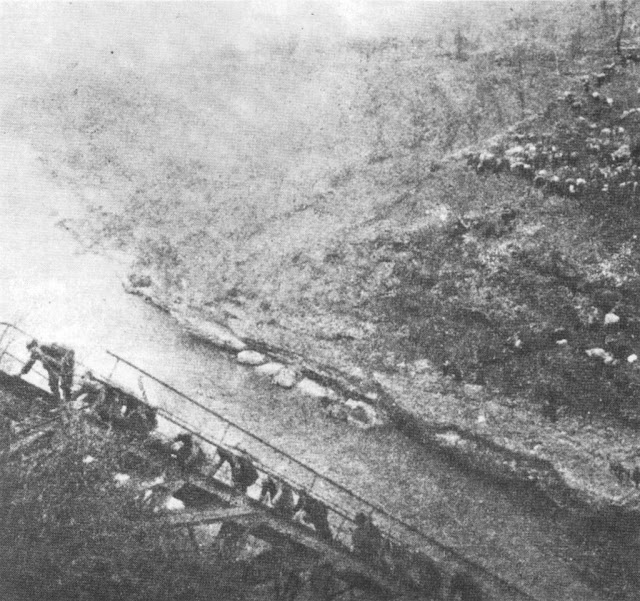 The 9th Dalmatian Brugade and the 7th Krajina Brigade were the last ones to cross the improvised bridge. After they crossed, the bridge was destroyed. With this act, all the wounded and sick were rescued.

The Main Operational Force was forced to throw around ten tanks and all heavy and light artillery into the canyon of the river Neretva. The reason for this is because the terrain of the Eastern Bosnia is covered with high mountains. They had to seize guns and howitzers again.

Battle of the Neretva, also known as the Battle for the wounded, was the most humane and the most complex battle of the National Liberation War. The German forces once again failed to destroy the Partisan movement. The Italians suffered heavy losses in this battle. The Chetniks of Draza Mihailovic experienced a complete breakdown.

Battle of the Neretva was not only a military but also a heavy political defeat of the Chetniks. Draza Mihailovic, who was known in the allied countries as the famous fighter against the occupiers, suddenly lost his prestige. The truth of the Chetniks' collaboration with the Axis powers went out in public internationally. On the other hand, the Partisans became a recognized ally and war partner. Soon afterward, the British military mission arrived at the Supreme Headquarters of the NLA.
battle Case white cetnici german Jugoslavija Koca popovic Most neprijateljska ofanziva Neretva offensive operacija partisans Tito war wehrmacht Weiss WW2 WWII Yugoslavia Yugoslavija